Posted on Wednesday 25 March 2020 by Gareth Prior

In what probably seemed a good idea when they decided to take out advertising contracts two further trams in Manchester have recently received new vinyl wraps. We’ve already mentioned in the Trafford Park line opening article that 3073 is now advertising intu Trafford Centre with the other new advert on 3091 for Go North Wales.

The advert for 3073 is a rather dull design with the slogan “Arrive in style” included on a gold and white colour scheme. Unfortunately the 73 of the number on the side has been made unreadable by the design! Contravision is included with the windows closest to the end of the tram fully white with the intu Trafford Centre logo whilst other windows have the “Arrive in style” slogan.

The second new advert is for 3091 and is a tourist based advert encouraging people to visit North Wales. A more colourful design it shows all of the outdoor activities usually on offer in North Wales. Full contravision is included as part of the advert.

Meanwhile, 3076 has now lost its advert for JJ Whitely Vodka and is back in standard fleet livery. 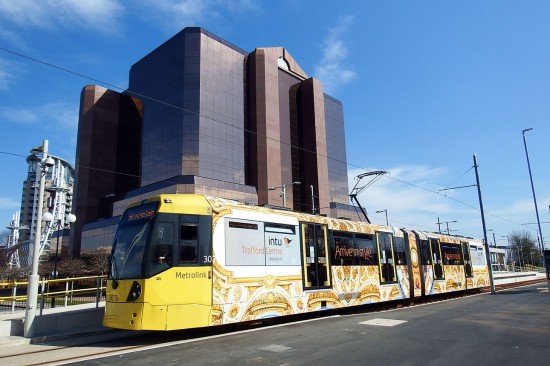 3073 is seen here at Imperial War Museum North on 22nd March. The tram is showing off its new advert for intu Trafford Centre. 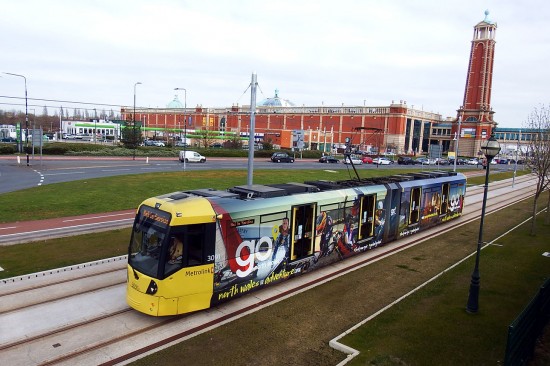 The second advert is on 3091 and is for Go North Wales. The day before services started to Trafford Park the tram to seen at intu Trafford Centre showing off its new livery to good effect. (Both Photographs by Steve Kemp)