Balloon 707 returns to service in Blackpool

After the completion of work to bring it back into service Blackpool Balloon 707 returned to passenger service on Saturday 14th March – a late replacement for the Trawler in the pre-announced line-up of trams. This is the first confirmed usage of 707 in passenger service since 2013.

Now, of course, 707 was due to return to the tracks in 2019 but after receiving initial docking and a repaint into the Millennium Green and Cream livery style issues were discovered with the batteries on the trams which despite efforts to rectify could not be fixed last year. However, not to be defeated the workshop team returned to work on the tram over the winter and after tests on Friday 13th March the tram was cleared for service.

707 was allocated as Tram “E”, as a replacement for the Trawler. The use of the Trawler on Heritage Tram Tours – especially winter tours which include running to Starr Gate and Fleetwood – was set to be one of the highlights of the weekend and its late withdrawal (it was only confirmed on Friday evening) did lead to some complaints but hopefully the sight of 707 back on the Prom was enough to allay these somewhat.

With 707 back in action and carrying the Millennium Green and Cream livery it means that the first time since heritage operation began there are two trams in the same colour scheme. The other tram is 718 which was allocated as the Shop Tram on 707’s first day in service which mean anyone at Tower and North Pier at time may have thought they were seeing double! 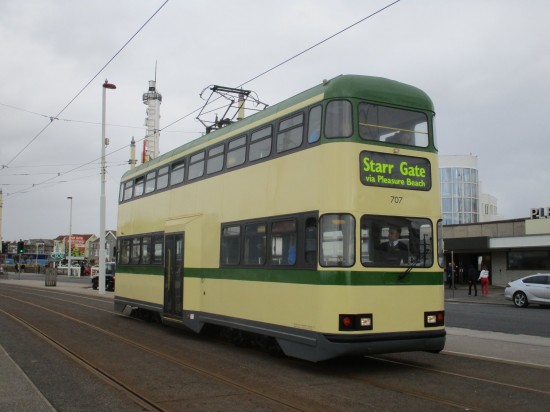 The newly returned to service 707 on the main line at Pleasure Beach as it heads down to Starr Gate. 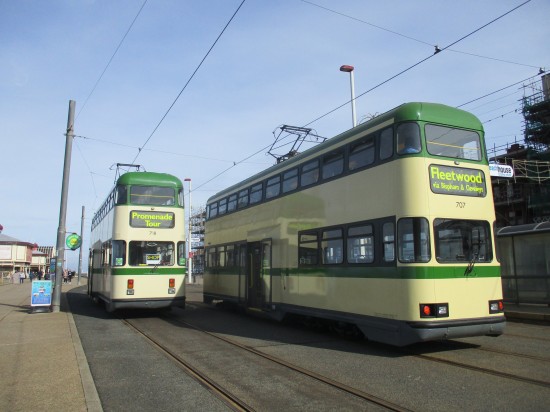 Likely to be a popular shot when they are both in service - the two rebuilt Balloons at Tower and North Pier in their identical liveries: 718 and 707. (Both Photographs by Rob Bray, 14th March 2020)

1 Response to Balloon 707 returns to service in Blackpool