Posted on Thursday 12 March 2020 by Gareth Prior

Four additional new trains and the double tracking of sections of the Tyne and Wear Metro are on the cards after the Government agreed to part funding of the Metro Flow project in the recent budget. £95 million will come from the Transforming Cities Fund which will now enable Nexus to deliver the complete £103 million project.

The idea behind the Metro Flow project is to increase service frequency on the network allowing trains to run every 10 minutes outside central areas (where the frequency is already higher) creating increased capacity of an extra 30,000 passengers per day. It should also improve reliability and allow quicker recovery from major disruptions whilst also giving better support for major events such as the Great North Run. It is also said to open the door to the expansion of the Metro network in the future.

What does Metro Flow actually consist of? There are two prongs of improvements, the main part of which is upgrading and electrifying an existing freight line to allow double Metro track between Pelaw and Bede. There is currently a Network Rail line running beside the Metro line from Pelaw to just after Jarrow where it turns into the Jarrow Oil Terminal. There are three separate sections of single line with passing loops provided at Hebburn and Jarrow stations – the single line sections run from Pelaw to Hebburn (800 metres), Hebburn to Jarrow (1.4km) and Jarrow to Bede (600 metres). This project will convert the freight line to Metro operation complete with overhead electric to allow the trains to operate.

In addition, the funding will also go towards a further four new trains, bringing the total up to 46. At the time of the new train announcement it was said that there was an option for an extra four trains if funding was forthcoming and now it is that option has been taken up!

It is planned that the freight line will be completed and ready for Metro operation by September 2022 whilst the new trains will be included as part of the main order from Stadler.

Tobyn Hughes, Director General of Nexus, said: “The Metro Flow project will allow us to deliver increased train frequencies, cut journey times and improve service reliability for Metro passengers. We’re delighted that this vital project has secured Government backing. It’s great news for the Tyne and Wear Metro and for passengers who rely on the service each and every day. It gives Metro greater capacity and will take more cars off the region’s roads. The project will involve the conversion of an existing heavy rail line, bringing it into dual use so that Metro services can run alongside freight services, which is similar to the operations we have on the Sunderland line. One of the key points of Metro Flow is that it increases the frequency of Metro services system-wide from twelve minutes to ten minutes outside of the central areas. For our passengers this means more regular services, and faster journey times. This project also gives us scope to examine future opportunities to expand the network to other areas that are currently not served by Metro services.” 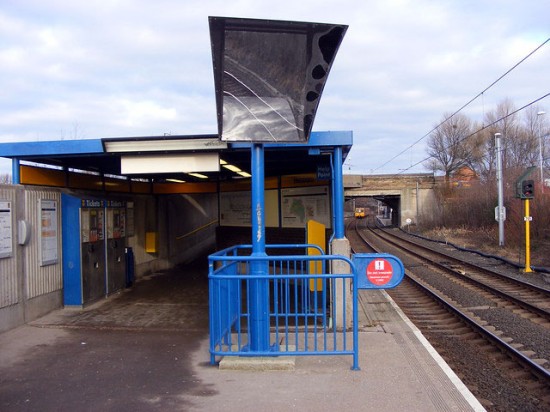 This is Hebburn Station which has staggered platforms separated by a bridge. The Network Rail line is behind the wall on the left. 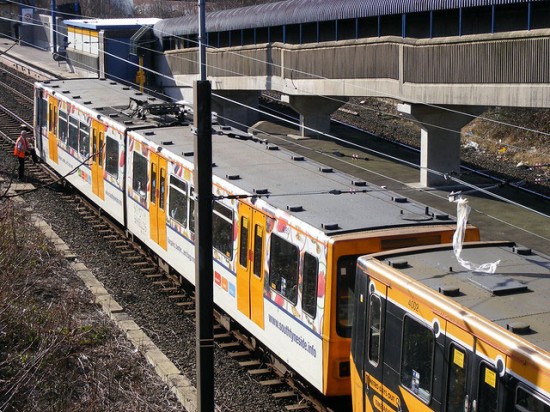 Another look at Hebburn Station with the Network Rail line behind the pedestrian walkway. In this view on 26th February 2008 4080+4002 were delayed by some plastic sheeting that had become entangled with the overhead wires. 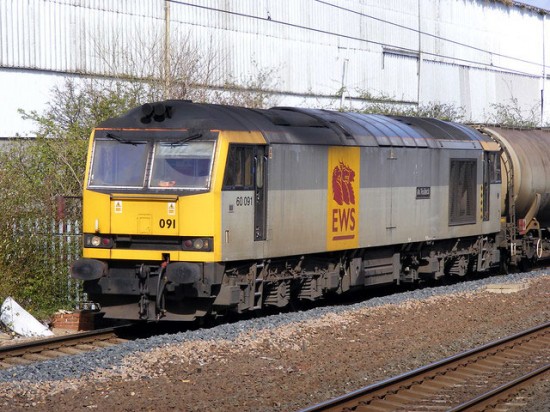 One of the infrequent freight trains on the Network Rail line is captured on 27th March 2008 in the hands of class 60 091. This train has come from the Jarrow Oil Terminal and is seen taken from the Newcastle bound platform. (All Photographs by Trevor Hall)