Around the World in Trams: Potsdam 406

Posted on Saturday 25 January 2020 by Gareth Prior

We are again in Potsdam for this week’s photo from around the world and its another Siemens Combino that features.

Potsdam was the first system to take delivery of Siemens’ Combino trams with 17 being delivered from 1998. Originally scheduled to total 48 problems with the Combino, which saw them being withdrawn across the world for rectification work, led to the decision being made that the remaining order would not be provided.

We are looking at 406 in this photo with the tram on the interlaced track under Nauener Tor on route 96 to Marie-Juchacz-Strasse. The gate was rebuilt in its current form in 1755, apparently to a design initially sketched out by Friedrich II, better known in English as Frederick the Great. This view was taken on 28th June 2019. 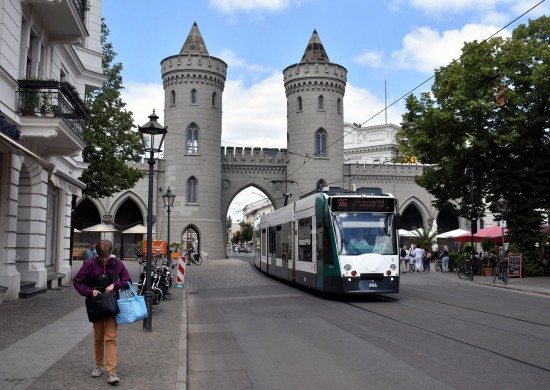