We move into the 1990s for this week’s Blackpool archive image as we take a look a look at one of three ex-Towing cars which was never permanently coupled to its trailer.

In the below image we view Railcoach 678 as it approaches Manchester Square heading for Pleasure Beach. The pronounced droop on the tram which was a feature of 678 towards the end of its operating career it already visible in this 1993 photo and the tram is the relatively plain fleet livery of the time with green only featuring at the top and bottom of the tram. Also in this photo we see two unidentified Balloon Cars heading north. This scene was captured in the June of 1993.

Railcoach 278 – as originally numbered – was converted into a Towing Car Motor in 1961 and entered service as such in the August of that year. Its trailer car was never permanently coupled (as was the case for 279 and 280 as well) and by 1972 the trailer had been withdrawn from service and 678 – as it had been renumbered in 1968 – had to go it alone from that point on. Remaining operational until 2006 the tram was then stored before it eventually joined the Fleetwood Heritage Leisure Trust and it is now stored at Wyre Dock with the remainder of their trams. 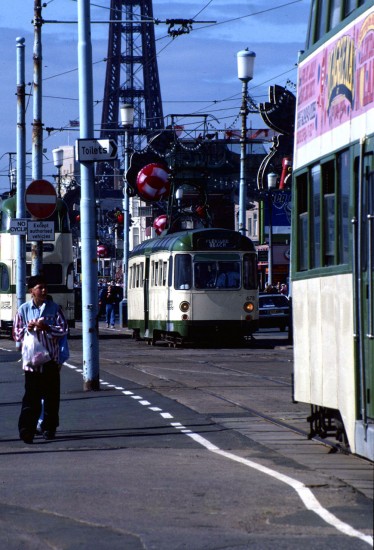