In Pictures: Adverts return to Tyne and Wear Metro

Posted on Thursday 5 December 2019 by Gareth Prior

Ever since the Tyne and Wear Metro vehicles went through their last refurbishment in the first part of this decade the fleet has been in uniform fleet livery (more or less, an advert livery does still exist on one of the unrefurbished operational Metrocars). Until now that is! 4034 has received an advertising livery for Artisanal Vodka and was first noted in this look in early December.

As is the current vogue across the country the advertising livery sees fleet livery retained on the ends with the new vinyls just added to the remainder of the vehicle receiving the new vinyls. For 4034 this is a red based advert with contravision used on each window. 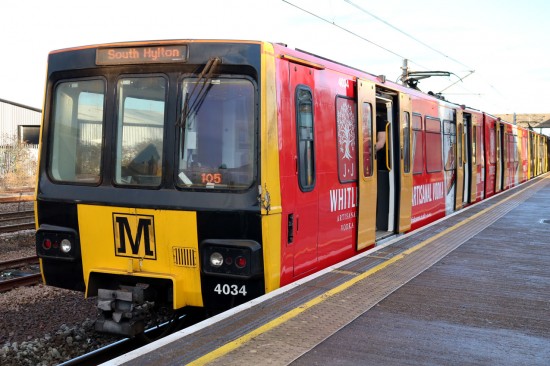 4034 at Pelaw on its first day out in an advert for Artisanal Vodka. (Photograph by Trevor Hall, 4th December 2019)