As we rapidly approach December it is almost time to give Picture in Time a rest for the remainder of the year but before we do we still have time to feature one more traditional tram and this time we end up on the South Coast for a view of a partially restored tram.

We featured a fully cosmetically restored Portdown and Horndean 13 back in August with it on display at the new home of the City of Portsmouth Passenger Transport Department museum but in the below image we head back to 1994 for a view of the partially restored lower deck. 13 was one of 24 trams which operated on the Portsdown and Horndean tramway being built in 1903 by the British Electric Car Copany and would remain operational until the line closed in 1935. By 1994 it has brought to the museum in Broad Street, Portsmouth and restoration had commenced with the lower deck, as seen here, starting to look the part once more. In the intervening years an upper deck has been added to bring it back to something approaching its original glory.

Alongside 13 is another Portsdown and Horndean tram but its identity is unknow and it has not transferred over to the CPPTD’s new home in Porchester. Can any readers help with its identity? 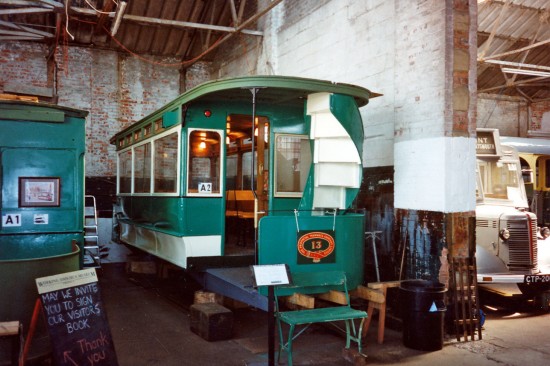