Another dip into the archives from 2007 for this edition of Picture in Time as we head back to Blackpool for a view of a tram which has since left the resort.

That tram is Blackpool & Fleetwood Box 40 which can now be found back operating at the tramway of its owners, the Crich Tramway Village. But in 2007 it was a firm fixture in Blackpool where it was one of the few “trams of interest” operational on the tramway (at a time when a Balloon or a Brush Car was the norm and not a heritage car!). This particular visit of 40 had commenced nine years earlier in 1996 when it has been brought out of storage at Clay Cross, a location it had only arrived at the previous year having spent the previous four years on display at Crich with its previous Blackpool visit having concluded in 1991. As it well known now 40 would remain in Blackpool (except for a short visit back to Crich in 2014) until early 2019 when a loan spell at Beamish was followed by a return to Crich for a period which is expected to see it longest ever operation in Derbyshire.

In the below photo, taken during 2007, we see 40 leaving Fisherman’s Walk, Fleetwood (this photo was possibly taken during that year’s Tram Sunday event) and heading back to Talbot Square (or North Pier if you prefer). This was pre the trams overhaul five years ago and sees the roof advert boards advertising the Tramroad’s centenary in 1998 whist the destination blinds are the dayglo versions it carried for many years. 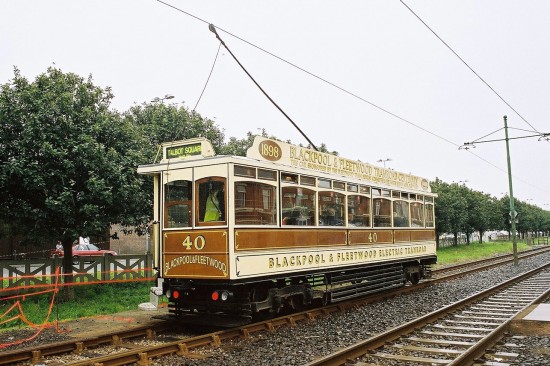