In Pictures: Now the blue moves to trams in hybrid livery

We have had a quieter period of livery changes on the West Midlands Metro recently but that looks set to change as the full blue vinyls are now being applied to those trams which had previously lost the magenta but kept the white/silver. The first of the trams to fall into this category is 18 which is now blue whilst keeping its adverts for Just Eat.

18 had been noted at the depot over the weekend showing off its new colours before first venturing out onto the mainline on Monday 14th October on driver training and then in service the following day. 18 had initially received the Just Eat adverts back in February (the second tram to do so, following on from 21) and at the same time saw all of its magenta replaced by blue as at this time that was the standard practice on West Midlands Metro.

We did wonder a few weeks ago whether trams in this hybrid style livery would also go fully blue and now we have our answer! Three other trams remain with silver/white as part of their liveries – 19 (20th anniversary livery), 21 (Just Eat adverts) and 36 (My Metro app adverts) – and we can only presume they will soon also go fully blue as well in the coming weeks.

Work is also continuing on preparing 22 for service after fitting of batteries but it has not yet done so. Fully in blue (unlike the information on our fleet list which is out of date!) the tram was last noted in the depot yard at the end of last week with some of the covering around the batteries missing but has yet to be used in revenue earning service. 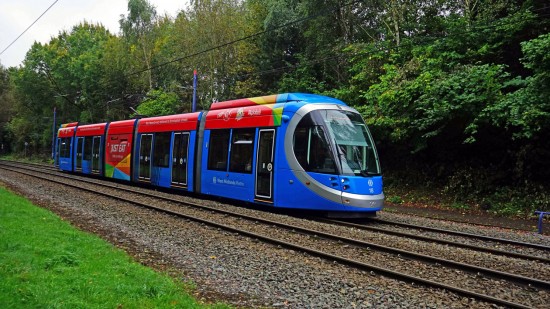 18 arrives at Dudley Street heading for Wolverhampton St George’s with its new all blue livery. 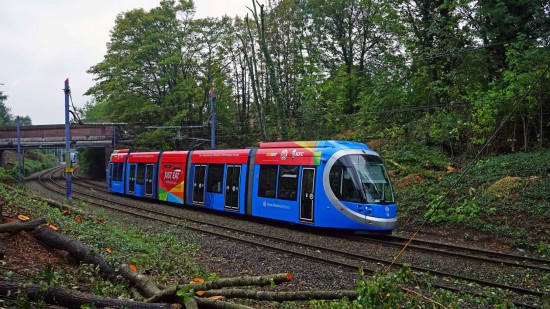 With more tree cutting underway along the side of the tramway we take another look at 18 close to Priestfield. (Both Photographs by Andy Walters, 15th October 2019)