In Pictures: T69 16 leaves Wednesbury for the last time

As had been announced a few days beforehand Midland Metro T69 16 was loaded up for departure from Wednesbury Depot on Monday 19th August – a day which turned out to be a busy one on the West Midlands Metro network with accidents and a tram returning to service in the new livery – with the tram leaving on the back of an Allelys low loader shortly after lunchtime. With 16 departing this now means there is no T69 on site for the first time since 01 was delivered on 17th February 1998.

As was reported at the end of last week the space where 16 has been living since it was withdrawn from service on 14th August 2015 is required for other use with the overhead wires set to removed to allow for inspection of the top of the Urbos3 trams and so the decision was made to send the tram away for further storage at Long Marston.

16 had originally been retained for potential use as an engineering vehicle but this never transpired and it had remained stored in the depot yard visible to passing trams for the past four and a bit years.

With 16’s departure it now means that there are only Urbos3 trams at Wednesbury Depot and brings an end to the original Midland Metro fleet livery in the public eye. It joins fellow T69s 07, 10 and 11 at Long Marston for storage. Of these 11 has been preserved by Birmingham Museums with the other two secured for UK Tram. 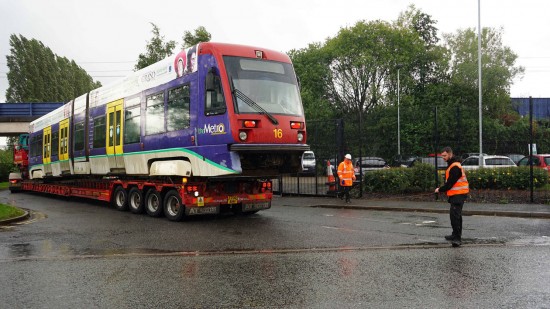 16 is backed out of the depot on the back of low loader. 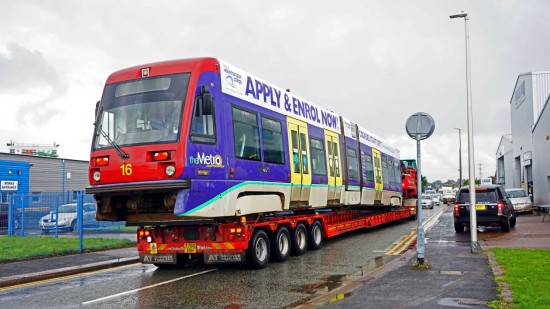 Now out of the depot confines and 16 is about to head off for Long Marston. 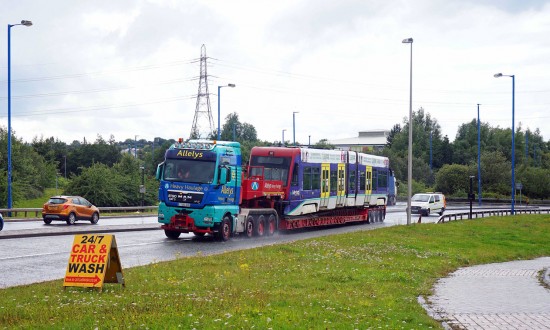 And off it goes! 16’s career in the West Midlands is over as it heads off to pastures new and storage at Long Marston. (All Photographs by Andy Walters, 19th August 2019)