The last T69 to leave Wednesbury

A little over four years since it last operated in passenger service it has been confirmed that Midland Metro T69 16 is to leave Wednesbury Depot for storage at Long Marston on Monday 19th August. Since withdrawal 16 has remained stored at Wednesbury Depot – visible from trams passing the depot – but with the space it was taking now needed for other purposes it is being “evicted”.

16 was the last of the T69s to be delivered to Wednesbury from Firema’s Caserta works in Italy – arriving on 11th March 1999, some four months since the previous arrivals – and will now also become the last of the class to also leave the depot. The last departure – also to Long Marston – was 10 on 24th March 2016 but at the time 16 was being retained with plans being formulated for it to be used as an engineering tram but for some reason these were never developed and it has remained stored at the bottom of the yard ever since.

But now a short section of line in the yard is to have its overhead removed to allow for easy inspection of the CAF Urbos3 trams and this means there is no longer any space for 16 in the yard. On Friday 16th August, 16 was moved onto road 6 in the depot which is the regular departure road and on their Twitter account West Midlands Metro have now confirmed that 16 will be leaving for Long Marston on Monday 19th August. It will join 07, 10 and 11 (as well as Manchester Metrolink T68’s 1016, 1022, 1024 and 1026) in storage at this location.

It does seem a bit of waste considering it has taken four years to come to the conclusion that 16 is surplus to requirements after all but with an expected increase in the tram fleet in future years as well it was likely to have to be moved somewhen anyway especially as it hasn’t been used since 2015. 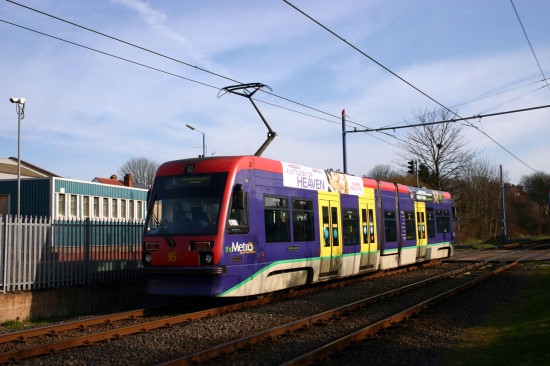 16 seen in happier times at Black Lake on 14th March 2011. (Photograph by Gareth Prior)

3 Responses to The last T69 to leave Wednesbury