Posted on Thursday 15 August 2019 by Gareth Prior

Another image taken in 1980 at the Seaton Tramway features in this edition of Picture in Time.

We are looking at the Colyton terminus of the Seaton Tramway, which only opened in the year this photo was taken, 1980. At this time it was a very different location to that which you can enjoy today but it was a crucial milestone in the history of the tramway giving visitors an even longer tram ride between Seaton and Colyton via Colyford. In this view we can see two trams in situ but the main one our eyes are drawn to is no. 4 – designed to look like a Blackpool Boat Car. Originally built in 1961 for operation in Eastbourne it was regauged in 1976 to run on the larger gauge operation in Seaton and has remained operational pretty much constantly since, although its low capacity has seen its use decrease in recent years. 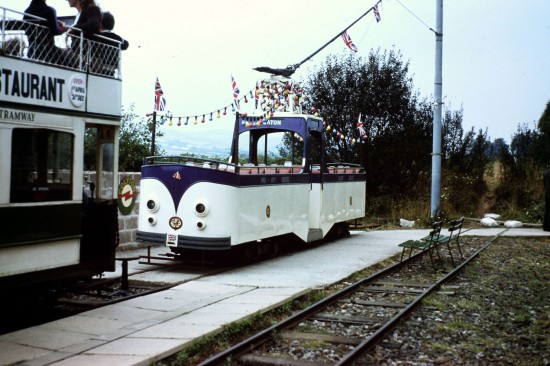