Posted on Tuesday 6 August 2019 by Gareth Prior

We head back to 2007 again this week for the latest Blackpool edition of Picture in Time and we feature one of the many all over adverts carried on a Balloon Car over the years.

The tram in question is Balloon 711 with the advert carried on the tram at this time being for Lambrini. This was the very first advert design to be applied to 711 with it making its debut in June 2005 and the contract remaining in place for a couple of seasons before being removed in the early part of the 2007 season. It is in fact 2007 when we see the tram just rounding the curve from Bold Street onto Fleetwood Esplanade with the tram set to form a service back to Starr Gate. As for the tram 711 would lose this advert in 2007 in favour of first a plain yellow livery, then a Metro Coastlines design and then an advert for Blackpool Zoo. A final change saw the application of the Purple and White Flexity type livery with the tram remaining operational as one of the “B” fleet Balloons although its use is limited. 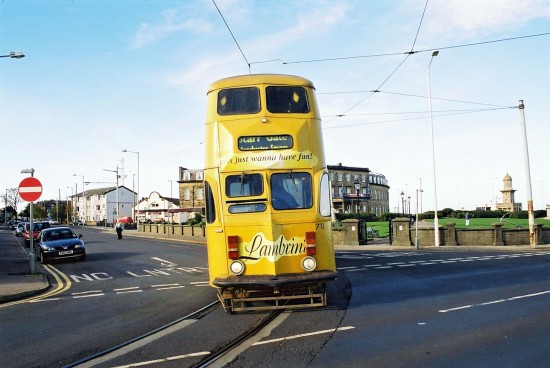