For the third week in a row we feature a tram in the Wartime Green and Cream livery although this time around the tram can be seen in the same colours today. That trams is Blackpool Brush 623.

Entering service as 286 in July 1937 this tram was one of 20 Railcoaches constructed by Brush of Loughborough to add extra capacity to the tramway following the closure of the Lytham and St Annes tramway. Receiving single indicators in 1974 and a pantograph in 1986 623 was originally withdrawn from service at the end of the 2004 season as part of the infamous mothballing but unlike many of its sisters it was only a short-term status as it was back running in 2005, although on a severely limited basis mainly as a driver training car. But then in time for 2007 623 went through the Paint Shop for a coat of Wartime Green and Cream and it become a pseudo celebrity thanks to this catching the attention to tram enthusiasts wherever it went! Remaining in service until 2009 withdrawal came again and entry into preservation with the Manchester Transport Museum Society the lucky recipients. Initially displayed at the short-lived Museum of Museums in Trafford Park it was soon off to Heaton Park where it became firm favourite. Its love affair with Blackpool wasn’t over though as it returned for the 80th anniversary of the class in 2017 but is now back as its new home in Manchester once more.

In this 2007 image we are at Fisherman’s Walk, Fleetwood with the tram waiting at the stop having just arrived. Judging by the stalls in the background and the fact it is waiting here this must have been Tram Sunday of that year. 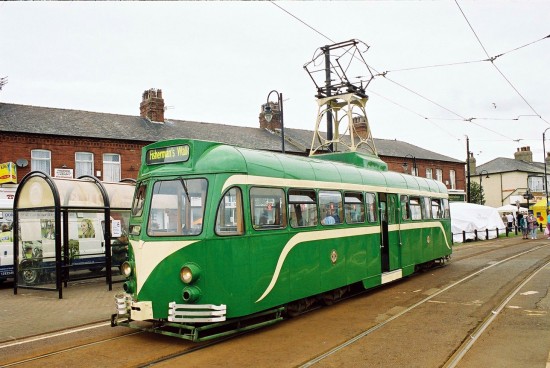