In Pictures: Crich goes Postal with a new exhibition

The chances are if you reading this website when you visit Crich you concentrate mainly on the operating trams or those at rest in the depot and Exhibition Hall. But if you have some spare time there are also a number of exhibitions to see with the latest temporary exhibition in the Assembly Rooms being on the subject of Mail by Tram.

As many will be aware in the early part of the 20th century trams across the British Isles were often used as postal cars with parcels carried on board whilst some also even carried post boxes. On the Isle of Man conductors were even made auxiliary postmen so they could empty post boxes at various stops along the line. This exhibition seeks to celebrate this important piece of tramway history as well as looking at when trams have been featured on stamps. And for the kids there is even the chance to design your own stamp! 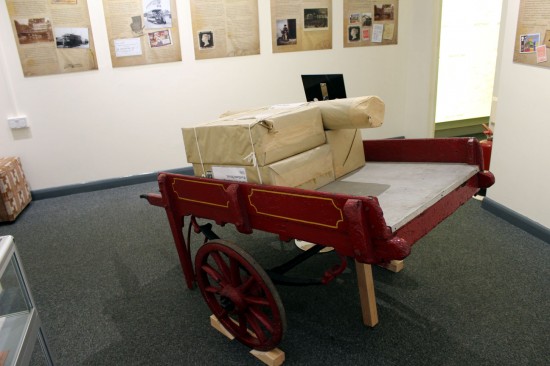 Pride of place in the centre of the exhibition is this Parcel cart which was used by Manchester Corporation Tramways. On loan from the Greater Manchester Museum of Transport this image shows the cart. 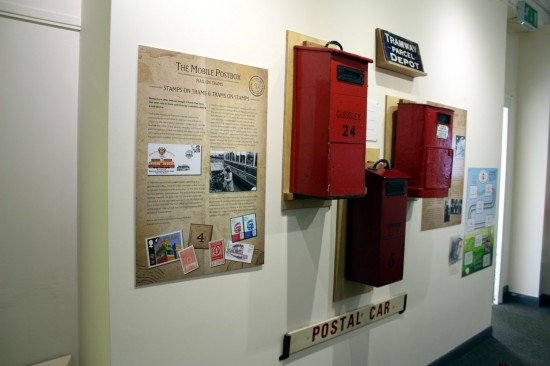 A few items on display as part of the exhibition. This includes the Tramway Parcel Depot sign from Huddersfield which was placed outside shops who were agents for the Tramways Parcel Department (at the top), tram postal boxes as used in Leeds and Sheffield and placed on trams when they were collecting mail and a Postal Car board which was used on trams in Sheffield to show when it was collecting mail. 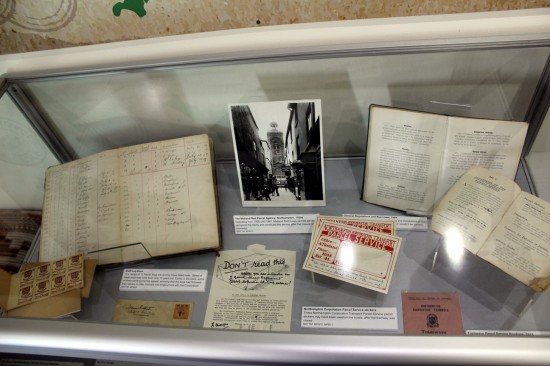 A display case as part of the exhibition including various documents from the Crich archive. This includes regulation and bye-laws for the carriage of parcels and Northampton Corporation Parcel Service stickers. (All Photographs by Gareth Prior)

2 Responses to In Pictures: Crich goes Postal with a new exhibition