As we reported last month all 15 of Nottingham Express Transit’s original Bombardier build Incentro trams are currently undergoing a refurbishment in a £3.5 million project which is said to “future-proof” the network. Whilst a lot of the work will be invisible to most travellers the most visible change will be a new livery – the third fleet livery variation these trams have seen since introduction in 2004 – much more akin to that which adorns the newer Citadis trams.

The first of the 15 trams to enjoy the work has been 203 – retaining the name Bendigo Thompson – with this tram being unveiled by the Sheriff of Nottingham, Cllr Catharine Arnold, on Friday 10th May.

The work includes a major mechanical overhaul – in a bid to improve the reliability of these trams which were the last trams for the UK market to be assembled in the country at Bombardier’s Derby plant – and also sees the replacement of floors and interior fittings. The new livery isn’t the only thing which has made the trams more like the Citadis with the interior also updated to a similar layout to assist accessibility for all passengers. 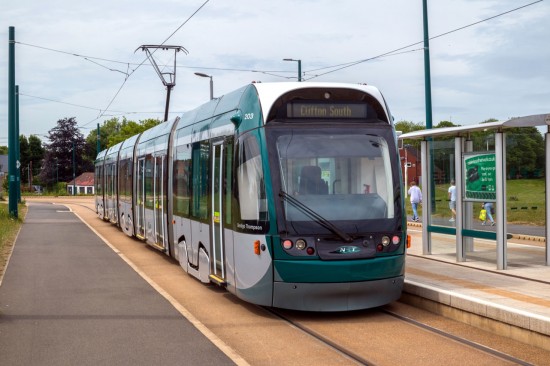 The new look 203 is seen at Wilford Village whilst working a service to Clifton South. The fleet numbers remain on the upper sides just behind the destination screen. (Photograph by Tom Bigley, 1st June 2019)