Posted on Tuesday 30 April 2019 by Gareth Prior

In this week’s Blackpool edition of Picture in Time we head back over 25 years ago to the early 1990s for a view of one of the Brush Railcoaches in Fleetwood.

Seen in this picture is Brush Car 625 which at the time was in the standard Green and Cream livery complete with Blackpool Transport wave and towers logo plus 1990s safety posters alongside the centre entrance. 625 had entered service at the end of July 1937 and would remain as part of the operational fleet in Blackpool until the end of the 2004 season when it became one of the trams to be withdrawn as part of the infamous mothballing. It survives today and is in private ownership being stored at Blackpool Transport’s Rigby Road Depot once more.

This image was captured on 31st August 1993 and shows 625 on Bold Street having just terminated with a service from Blackpool. The destination blind has already been changed for its return trip to Starr Gate and it will shortly move around the corner to the Fleetwood Ferry loading stop to let passengers on board. A Balloon Car – with side adverts for Twix – is just behind the Brush Car as well. 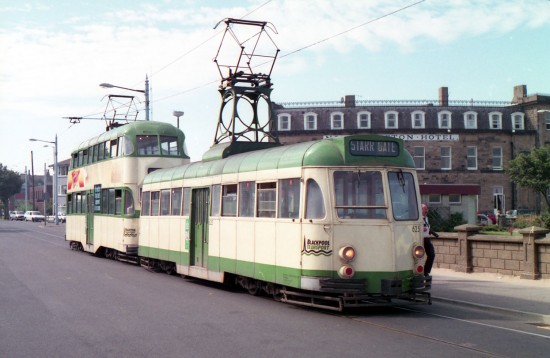