Posted on Saturday 27 April 2019 by Gareth Prior

A change of location for the next few week’s modern tram Picture in Time series as we head across the Pennines from Sheffield to Manchester.

In this image we see T68 1002 at the back of a double unit just as it enters Victoria Station on 25th February 1992. This was during the testing phase of Metrolink with it being another two months before fare paying passengers would be carried on this section of track (services from Victoria to Bury would start in early April before extending across Manchester to G-Mex later the same month). Of note here is that 1002 is carrying a name – Manchester Arndale Voyager along with advert boards on top of the tram. This was the very first name to be carried on a tram in Manchester and would remain in place until 1996. 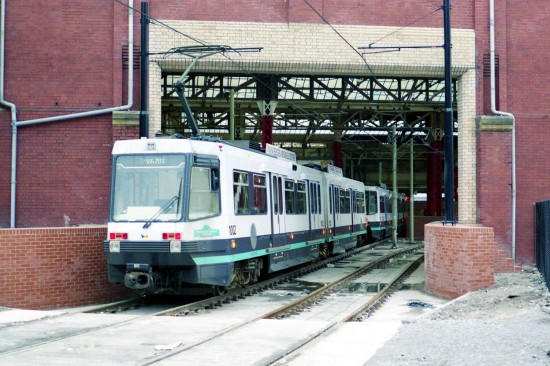