As the first year of succesful operation for Blackpool’s latest class of tram draws to a close, now seems an appropriate time to offer a small update on some of the most recent developments involving these trams. Fourteen of the Flexity2 class are currently in regular use, finally offering a viable year-round service and proving extremely popular even in the depths of winter.

The two trams that are not in regular service are 002 and 006, as has been the case for several months now. Since returning from Germany on November 1st, 002 has been used for driver training duties but no confirmation has yet been received that it has carried passengers, meaning thats its single appearance in April remains unique for now. As for car 006, it has been stored inside Starr Gate depot since August undergoing unspecified work, and is thought to have donated various parts over this time to help keep its sisters on the road. It is unfortunate that such a new tram has been used in this way, particularly as the car carries advertising for the Pleasure Beach Ice Arena which has gained minimal exposure. Hopefully the required work to return oo6 to service will soon be carried out, as the availability of all sixteen Flexities simultaneously has yet to be achieved.

Another recent news item not previously reported here, was the application of adverts to car 008 for the first time just before Christmas. This tram now promotes a National Health Service campaign to raise awareness of the potential dangers of high blood pressure. The posters have been applied to just one side of the tram, in the usual style with vinyls on the roof sides and the lower panels of the centre section. A background colour of purple has been chosen which blends in well with the normal livery. 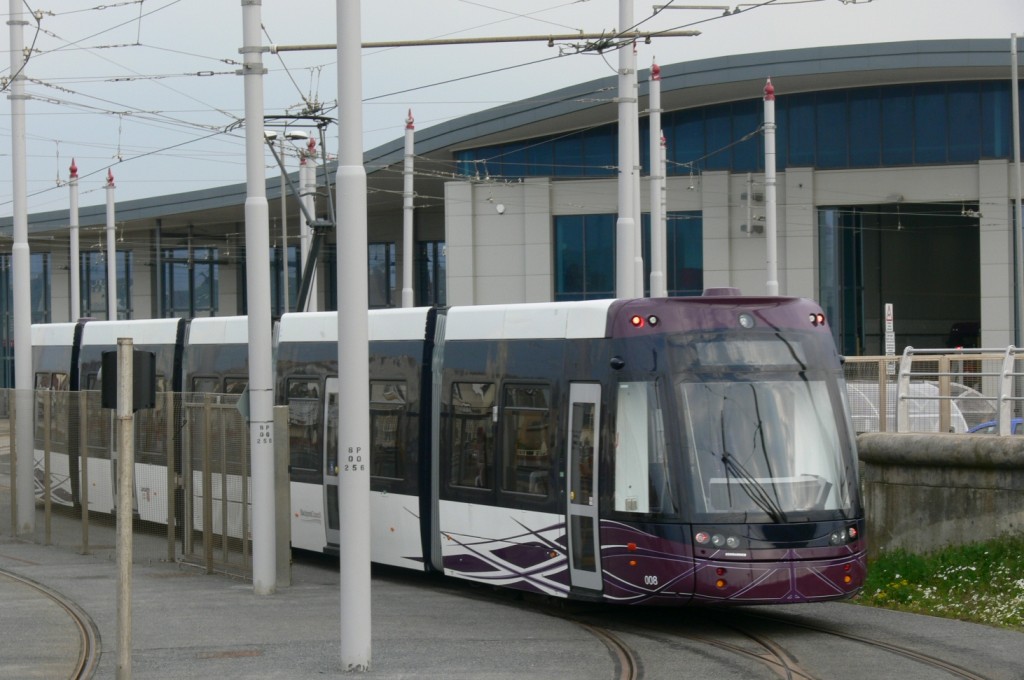 Seen before the application of advert vinyls, 008 being shunted onto the depot fan at Starr Gate earlier this year. (Photo by Andrew Waddington)