Around the World in Trams: Stuttgart 460

Posted on Saturday 3 November 2018 by Gareth Prior

Today our world tour is back on mainland Europe as we head to Germany and the city of Stuttgart.

The tram in today’s image is no. 460, a metre gauge Esslingen GT4 which was built in 1961 for use on the traditional Stuttgart tramway. This tramway has been modernised in recent years to offer a modern Stadtbahn system totalling over 81 route miles with the last replacements taking place in late 2007. But at the time of this photo – 1993 – 460 was still operating and is seen here on shuttle service E on temporary Gartenschau track. 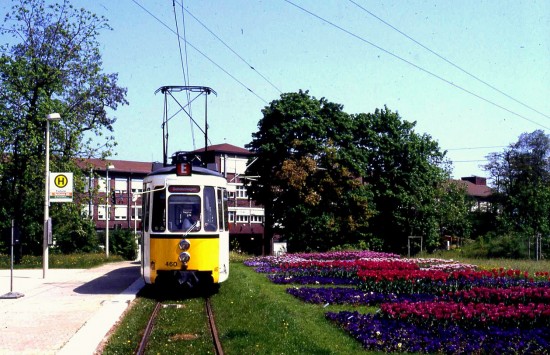 2 Responses to Around the World in Trams: Stuttgart 460