The Heaton Park Tramway have announced a provisional launch date for the next new addition to its fleet of operating trams, Blackpool Ex-Towing Railcoach 680. Subject to the completion of the new Lakeside depot and any necessary commissioning work, 680 is due to be launched into service at its new home on Sunday 24th March 2013, kick-starting what should be another exciting year for Manchester’s preserved tramway.

680‘s entry into service will doubtless be welcomed with open arms by many enthusiasts, as this car has not carried passengers since 2008. However, it has remained fully intact and mobile since then, and during 2010 it was repainted into all-over cream, inspired by the livery it carried upon rebuilding with flat ends in the 1960s, when it was modified to haul a trailer as part of the Twin car programme. The tram is now the last of the sold cars left at Rigby Road, but as soon as undercover accomodation becomes available at Heaton Park it should depart to begin the next chapter of its long and succesful life.

To add further novelty value, it is planned that 680 will operate at the park with a pantograph for one day only to co-incide with its launch. This will unfortunately restrict it to running on the double track only, but on the plus side, this means that any photographs of the tram taken on this day will probably be unreapeatable. Soon afterwards, the car will be fitted with a trolley arm and enter regular service in Manchester, alongside other ex-Blackpool trams such as Brush Railcoach 623 and Replica Vanguard 7. 680 will duly become the first English Electric Railcoach to operate on a museum line, and with sister car 678 currently in a poor condition and destined for display in Fleetwood, it could well become the only Ex-Towing car ever to operate outside Blackpool!

680‘s launch is just one of several potentially exciting events proposed at the Heaton Park Tramway for 2013, with a good mix of events aimed at enthusiasts and families, including teddy bear and pirate themed days. 24th March will also commemorate 80 years since the last tram ran on Middleton Road in the first generation era of the city’s tramways. Clearly the new depot is going to have a huge impact on the activities of this tramway, and 2013 looks set to be one of their most eventful years to date. 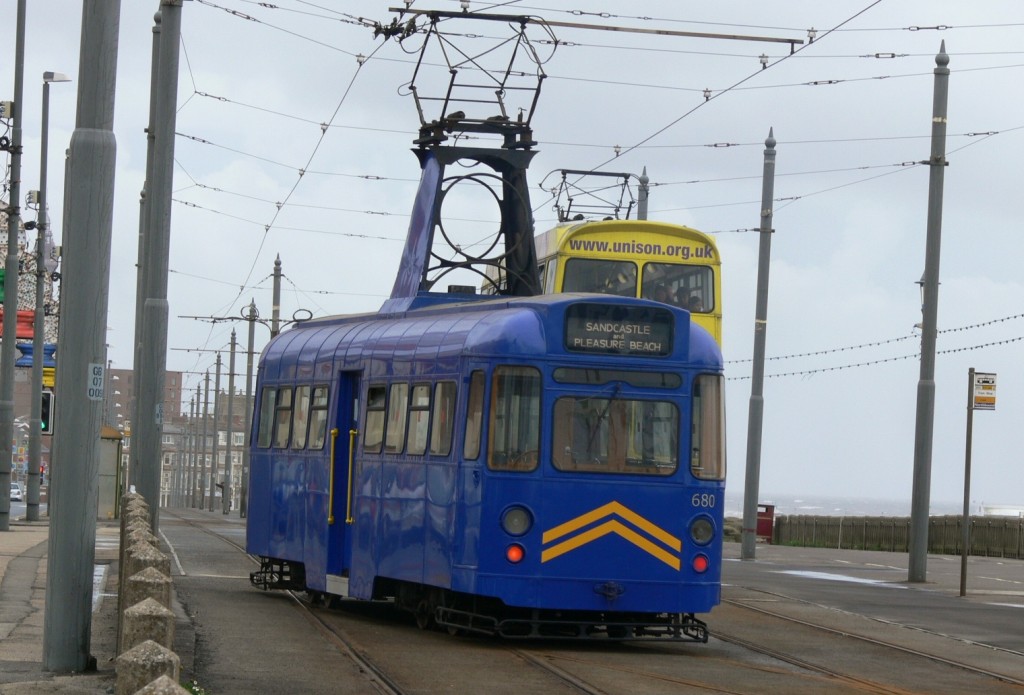 Blackpool 680 pictured reversing at Cabin during 2008; its last year of service at Blackpool. Since then the drab blue colour has been replaced by an equally plain but more stylish cream livery. (Photo by Tony Waddington)