Rocket tram lights up for Christmas

Blackpool’s famous illuminated Rocket tram 732 has surprisingly been illuminated again this week, to co-incide with the start of the town’s Christmas lights. Although nowhere near as spectacular as the main autumn illuminations, the annual display normally includes a special feature on Gynn roundabout – and this year’s was, of course, the Rocket tram!

From Thursday 22nd November, 732 shone brightly once again after a few weeks of darkness. This was intended to be the night when the Christmas lights in the town centre were switched-on, but poor weather led to this event being postponed (bad weather in Blackpool – who saw that coming!?). As the tram had remained in situ since the end of the 2012 illuminations season, the decision to have it lit up for the Christmas season was a logical and very welcome one. Sadly the tram has sustained some minor damage to its rear end, presumably at the hands of vandals, a situation not helped by the removal of the barrieres placed around the tram for its initial period of display. It is intended to repair this damage, and put up temporary fencing, in the next week or so which will hopefully keep this priceless tramcar safer for the remainder of its stay at Gynn Square.

It is also worth mentioning that the other tram which became a static exhibit for the 2012 illuminations, Brush car 290, has remained untouched since the lights switched off earlier this month. The car remains on its temporary siding at Pleasure Beach, with no confirmed plans yet announced for its immediate future. 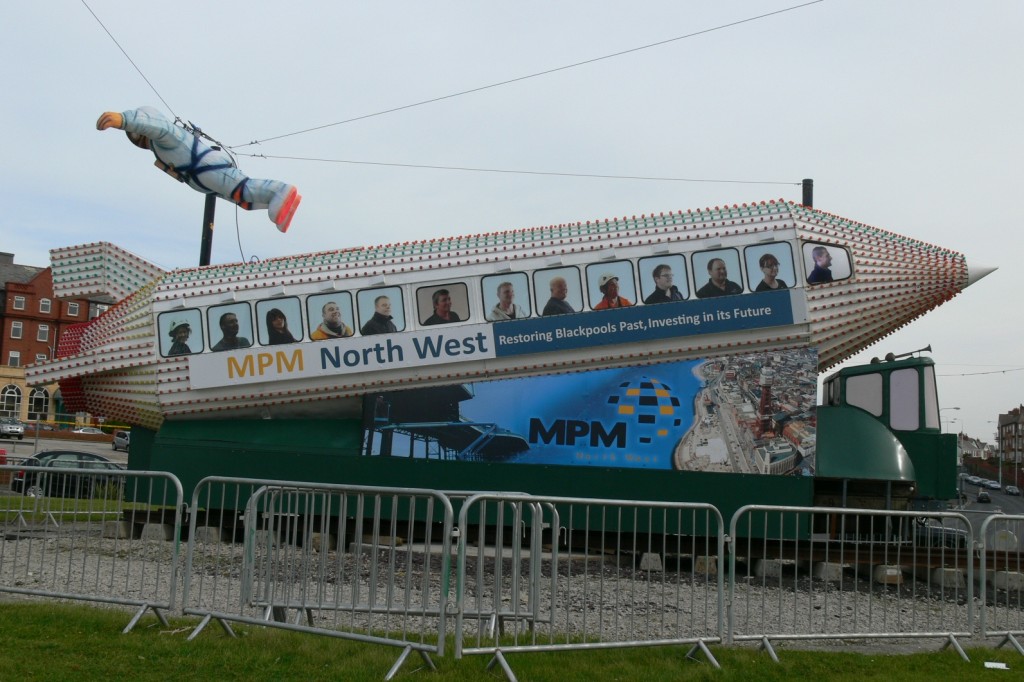 The Rocket, 732, seen on Gynn roundabout earlier this year, with the barriers then placed around it clearly visible, along with the giant spaceman suspended above it! (Photo by Andrew Waddington)