The bizarre tale of Blackpool Centenary car 646‘s post-service career continues, following on from recent developments which saw some items taken from the tram being offered for sale on eBay. The first item was then hastily removed from sale following an announcement that a museum had expressed interest in taking the complete tram – but its fate now seems to be sealed as more parts have begun to be listed on the same Internet auction site.

It is now claimed that, whilst a museum has shown interest in 646, they are only interested in acquiring parts such as bogies, motors and compressors and that they would not be willing to preserve the car. Presumably such parts would be kept as spares, and although the identity of the museum in question has so far been kept a secret, presumably it will be one that owns another tram with similar equipment. 646‘s bogies, controllers etc. would only be compatable with another Centenary or Jubilee car, and would be of no use to anyone wanting a source of spare parts for another tram, such as a Railcoach or Balloon car.

With this in mind, 646‘s current owner has listed several items which have already been removed from the tram for sale on eBay. A search for ‘Blackpool tram 646‘ on the website will reveal such items as a driver’s seat, internal mirror, fleet number plaque and even platform doors from the tram all up for grabs. A destination blind has already been claimed for sale, and more items are likely to be listed in the near future. Although this gives tram enthusiasts a very rare opportunity to own an unusual souvenir from one of the traditional Blackpool fleet, the vision of vultures gathering around a carcass is one that springs to mind for some, and does seem a rather undignified way for this tram to end its life. The seller claims that buyers will be helping to keep a piece of history alive rather than destroying it – a questionable claim, although it is admittedly better to see tramcar parts go to collectors instead of ending up in a skip.

However, in another strange twist, the owner of the tram has also claimed that a second museum has now come forward with a desire to acquire the body shell of the tram for further use. Quite what is being planned remains a mystery, but it seems more than a little odd that so many items are being taken from 646 if the body stands a good chance of becoming a static exhibit in the future. Indeed, its owner states that the damage inflicted by vandals means that the car is ‘not a museum piece anymore’ – a strange claim when one considers some of the derelict remains of trams that have been restored by museums such as Crich and Beamish – and one that is quickly contradicted by the claim that a museum wants to make use of the car body! The description of 646‘s ‘classic tram structure’ will also raise eyebrows, as following its overhaul in 2002 the tram was considered by many people to be one of the ugliest cars in the fleet.

Whilst it would have been nice to see this tram enjoy a promising career in preservation, with seven other Centenary cars also surviving in better condition, the odds are very much stacked against 646, and as more parts begin to disapear, the chances of survival lessen. It is claimed that the tram’s current owner has contacted 65 museums, none of which showed any interest in acquiring the complete tram, and in this case perhaps it is time to accept that, sadly, 646‘s days are probably numbered. 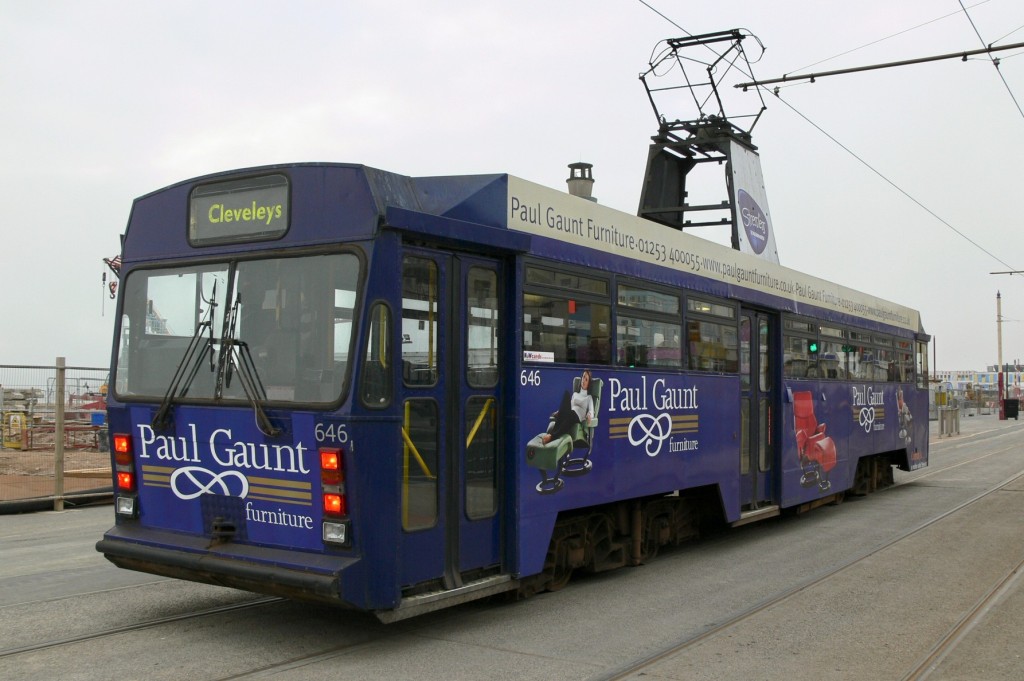 A recent, but historic scene with 646 at Manchester Square in May 2010. Here the tram was bound for the temporary nothern terminus of Cleveleys, due to trackwork. (Photo by Andrew Waddington)