Details of next rail replacement area in Sheffield announced

Posted on Wednesday 1 August 2018 by Gareth Prior

With works on Area 2 of the 2018 rail replacement in Sheffield continuing at a pace details have now been released about Area 3 – a much smaller area and for a shorter period. This time round it will just be the Purple route which is affected with the work due to take place between Friday 10th and Sunday 19th August.

The rail replacement work will take place on Norton Avenue and throughout this period no trams will run between Gleadless Townend and Herdings Park. The P3 replacement bus will operate in the affected section and there will also be some Purple route trams between Cathedral and Birley Lane to add capacity to the Blue route. These additional trams will only run in the mornings and late evenings Mondays to Saturdays and throughout the day on Sundays.

Once this work is completed there will be two further sections of track to be tackled between Gleadless Townend and Halfway/Herdings Park and from Donetsk Way and Halfway. All work is due to be completed by 14th September 2018. 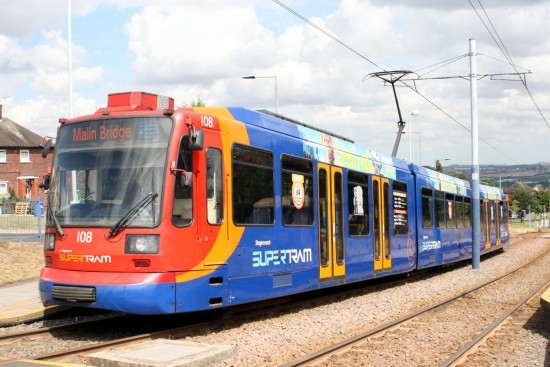 The current rail replacement works – due to continue until 8th August – are concentrated on the section between Birley Lane and Halfway with the former stop the temporary terminus of the Blue route. On 30th July 2018 we see 108 at the temporary terminus reading to depart for Malin Bridge. (Photograph by Martin Miller)

* A video of movements at the Birley Lane temporary terminus on Monday 30th July, courtesy of Martin Miller, is available on YouTube.