The second annual Totally Models event took place in Blackpool over the weekend of 23rd and 24th June and the Balloon Car was the star of the show – especially on the Sunday of the event – and not only with those trams in service on the Prom! The weekend also saw the chance to see behind the scenes at Rigby Road with depot tours provided alongside the model exhibition.

Both days saw a seven tram heritage tram service which as well as the standard pattern of tours heading north from Pleasure Beach to destinations such as North Pier/Tower, Cabin, Bispham, Thornton Gate and Fleetwood saw an extra tram used on depot shuttles to allow visitors to easily reach the model exhibition which was held in the Paint Shop and Body Shop. An extra heritage tramstop was also provided on the Prom at Manchester Square.

They saw all the best laid plans often go awry and that is exactly what happened with the tram allocations on both days. On the Saturday Balloon Cars 701 and 713 and Centenary Car 648 were unable to enter service which meant that the day started with Box 40, Bolton 66, Standard 147, Boat 600, Brush 621 and Railcoach 680 on the main service and Balloon 717 on the depot shuttles. Despite the setbacks before service began this was still a good variety of trams including enough to keep the general public interested as well.

Unfortunately the sole open tram currently available for service – Boat 600 – wasn’t to last long in service as shortly after 1030 on its first trip to Pleasure Beach it dewired entering the loop with its trolley head becoming detached. With the tram fouling both running lines quick thinking by the duty inspector saw Brush 621 – fortuitously on the loop waiting departure – moved back to couple to the Boat and tow 600 onto the loop. This was all completed within 5-10 minutes which meant that the core service wasn’t affected at all with only 621’s next trip north delayed whilst the Fleetwood working that 600 was due to operate was cancelled. Once 600 was recovered to depot its place was taken by Balloon 718.

The unfortunate circumstances which led to 600 returning to depot on day one meant that on a lovely, warm and sunny Sunday 24th June there were no open trams available. Hopefully the overhaul of Boat 227 can be completed in time for the main holiday season and then it won’t matter as much if one of the trams has a problem but it does show how stretched the open tram fleet has become in recent years.

The service was very much dominated by the Balloon Car on Sunday 24th June with the six standard trams being Bolton 66, Standard 147, Balloon 700, Balloon 717, Balloon 718 and Balloon 723. The depot shuttles were in the wheels of Balloon 715. Brush 621 had been due to run but was declared a failure before leaving Rigby Road.

Away from the tram service and – if you were quick off the mark – there were tours of Rigby Road Depot. Starting off in the Paint Shop and then the Body Shop amongst the stalls and exhibitors at the model exhibition this gave a chance to see what progress is being made on various trams in the heritage fleet to return them to service along with the opportunity to see some of the trams not currently operational.

In the Body Shop – and visible to anyone who went to the exhibition – were three trams. This saw Lytham 43 and Glasgow 1016/Paisley 16 (along with various parts which belong to it!) in store whilst Balloon 711 was also here for a very novel purpose! With the Manchester Model Tramway Group displaying here – which included a model of 711 – their layout went through the centre doors of the full size tram and out the other side! Full marks for ingenuity and surely one of the first times ever that a model tram has travelled through its big sister!

The tour then moved on to the remainder of the depot with Twin Car 675+685 in the Fitting Shop preparing it for a return to service. The Electrical Compound is the permanent home to several trams with the roof here said to “leak the least!” so some of the more precious trams are housed here. At the very rear can be found Boat 227 (currently approaching the end of its overhaul) and Railcoach 279 with Boat 230 and Birkenhead 20 just in front. Also located here were Standard 143 (awaiting a resumption of its restoration) and Centenary 642. The Centenary Car is currently under attention with a view to returning the tram to service later this year. During later tours on Saturday 23rd June Boat 600 was also here awaiting repairs to its trolley head with Brush 631 used to move it into position.

Inside the main depot and for many the first viewing of a Tatra in Blackpool with visitor (for storage) Halle 902 visible along with many other trams which have either returned to make Rigby Road their homes again or have never left. For many of these trams hopefully happier times in service again will follow in the years to come.

With fine weather and an intensive tram service in operation on the Prom the event seemed to be fairly popular with enthusiasts although the lack of an open tram for the majority of the weekend was a bit of a downside as they will always be popular with the general public who are less likely to be swayed by a Balloon Car. Nevertheless this event is a welcome addition to the events calendar in Blackpool and looks set to remain a key ingredient in years to come. 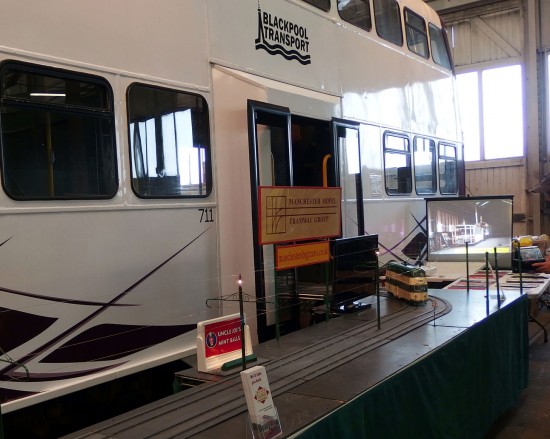 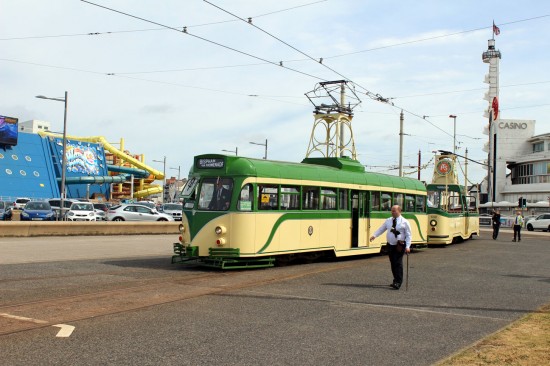 Brush 621 rescues Boat 600 at Pleasure Beach. The trolley of 600 is held down with the head broken. 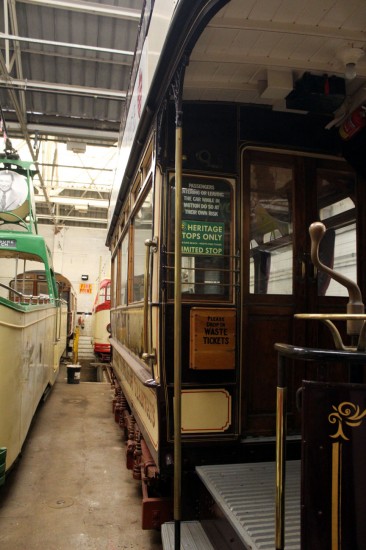 Open trams at the back of the Electrical Compound. 227 should be back in service in 2018, there is a chance Birkenhead 20 may be commissioned but for Boat 230 it is a case of waiting for space in the workshops. 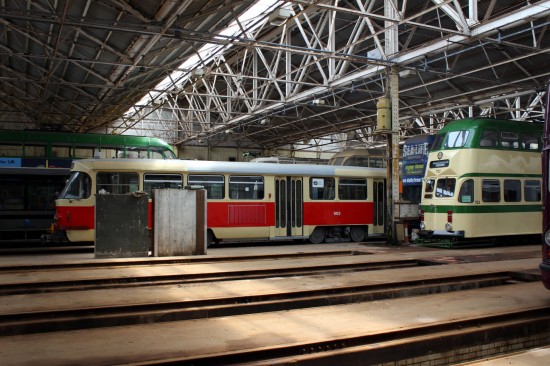 Halle 902 in the depot. Beyond the Tatra you can see the roof of Balloon 703 and the Hovertram whilst another withdrawn tram – Balloon 709 – is just behind. Also just beyond 902 is the Trampower tram at Rigby Road for storage purposes only. 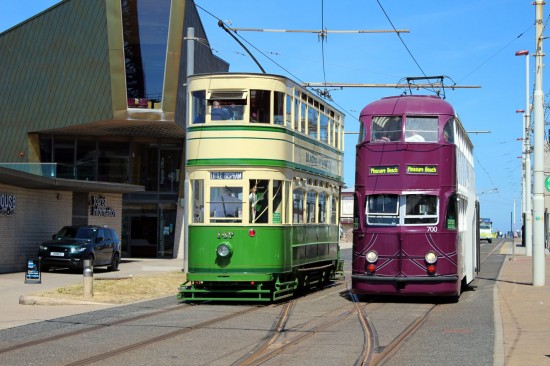 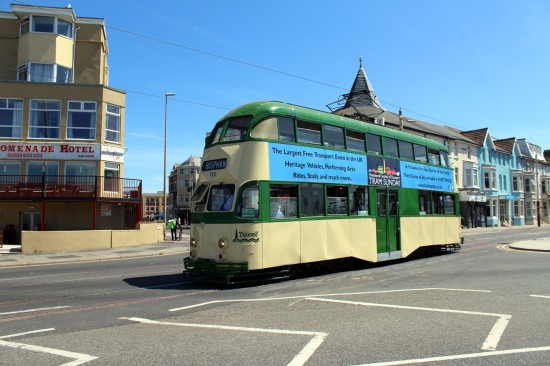 Balloon 715 crosses the Prom with a service from Hopton Road to Bispham. (Photographs x5 by Gareth Prior)

* We will have plenty more photos from the weekend in a future update of British Trams Online.