Posted on Saturday 23 June 2018 by Gareth Prior

Blackpool is again the location for our next instalment of Picture in Time as we go back to the year 2000 for a view of one of the many all over adverts carried on a Centenary Car.

This is Centenary 645, a tram which entered service in 1987 and by the time it was caught on camera in this shot on 26th August 2000 it was more or less still in original condition – at least a lot more original than that after its rebuild in 2005! The tram, seen here at Pleasure Beach, was carrying its fourth all over advert of its life at this point with this black and orange design for The Mobile Phone Centre, Cleveleys along with religious statements on the end panels (no, we don’t know why either!). This advert was a year old by this time with its still having another 20 months left before its removal. 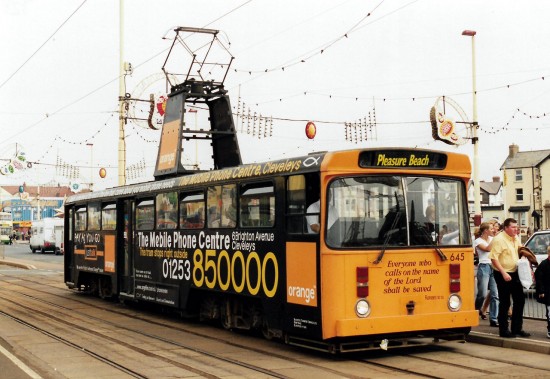