Around the World in Trams: Frieburg-im-Bresgau 279

Posted on Thursday 21 June 2018 by Gareth Prior

Germany is once again the location for this edition of Around the World in Trams with the system in Frieburg-im-Bresgau the focus of our attention.

The first lines in Frieburg-im-Bresgau opened in 1901 and the network is metre gauge. Part of the German tramway renaissance since 1980 there has been a expansion of the network with just over 20 route miles (32.3km). The system has a number of different classes of tram in regular use all dating from 1981 and later.

In this view we see 279 which is one of a batch built by Duewag in 1999 and 2000. It is at the Hauptbahnhof (main railway station) which is located on a bridge across the railway line. Working a route 1 service to Landwasser this photo was taken on 25th September 2001. 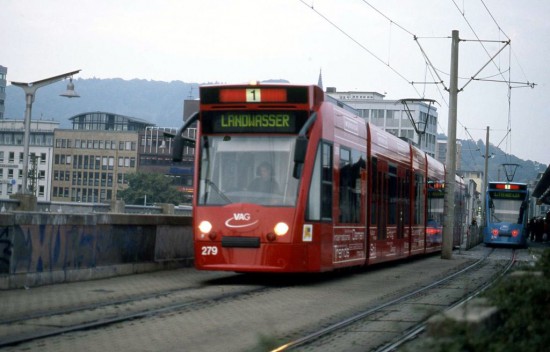 1 Response to Around the World in Trams: Frieburg-im-Bresgau 279