Taken on 25th February 1992 this is 1004 passing the steps leading to G-Mex – as it was still called then, Manchester Central today – and approaching the grand Midland Hotel. With public services now starting on this section until 27th April the same year – and with no passenger services launching until 6th April – this is presumably a driver training and test run but the pedestrians don’t seem to be particularly bothered at the new entry into Manchester’s streets just passing them by!

1004 was built at Firema’s Casaralta Works and had arrived in Manchester on 27th November 1991. On 6th April 1992 it was to form half of the first Bury to Victoria passenger service (coupled to 1008) and would remain in service until 16th May 2012 – only the second to be withdrawn. It left Manchester for scrapping on 25th April 2014. 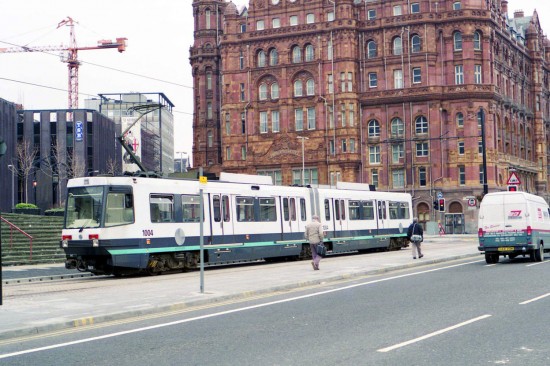