Posted on Saturday 2 June 2018 by Gareth Prior

Picture in Time returns to the Lancashire coast for another photo taken on the Blackpool Tramway back in 2002.

The tram featured this week is Twin Car 673+683 which is shown in the Green and Cream livery as it approaches Bispham with a southbound special to Pleasure Beach on 11th September 2002, which judging by the low number of passengers on board is likely to have started from Little Bispham.

673 had been converted into a Twin Motor Car from English Electric Railcoach 273 with entry into service coming in July 1961 initially retaining its original number ahead of the 1968 mass renumbering. It was permanently coupled to its partner T3, which had entered service in 1960, – latterly 683 – at the start of 1965 and by the time of this photo the biggest change to the tram was that the motor had received a pantograph. The trams were one of the lucky five Twins to be fully refurbished in 2003, also receiving the Turquoise and Yellow version of the Metro Coastlines livery. Withdrawn from service in 2009 they were acquired privately for preservation and are now part of the Fleetwood Heritage Leisure Trust collection, stored at Wyre Dock. 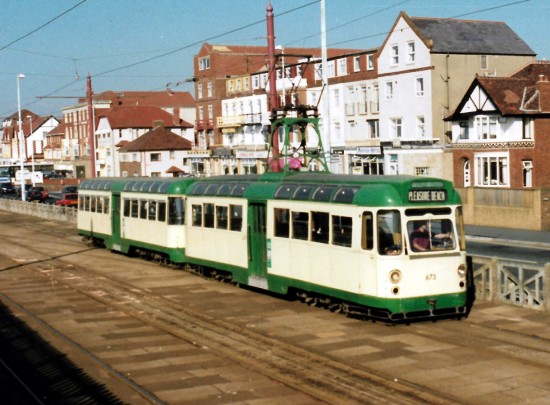