A small tram system totalling only 5.5km can be found in the town of Nordhausen, Germany and that is where our around the world trip finds us today.

The tramway only has three routes and is a metre gauge system, originally opening in 1900. This view shows two differing trams heading in opposite directions on 22nd February 2005 with 80 working route 2 to Parkalee as 103 works the other way with a route 1 service to Bahnhofplatz. 80 is an Esslingen built tram in around 1962 and was originally owned by Stuggart whilst 103 was built by Siemens as new for Nordhausen in 2002. The former tram was sold to Iasi in Romania in 2012 but 103 remains part of the fleet in Nordhausen today. 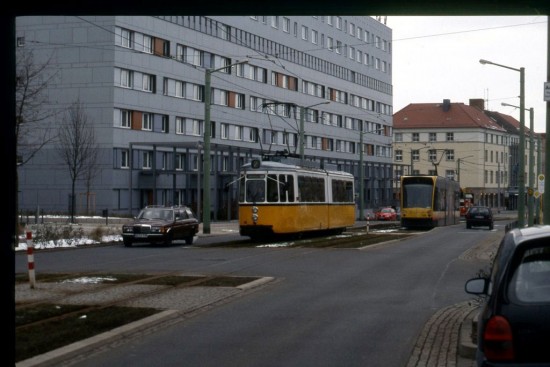