Posted on Thursday 26 October 2017 by Gareth Prior

In their 80th anniversary year we are featuring another of Blackpool’s Brush Railcoaches in Picture in Time today. This time around the tram in question is 623 – which has been enjoying a holiday back home in 2017 but we see it before it enjoyed a renaissance thanks to a coat of wartime green and cream.

The tram was originally numbered 286 and entered service in Blackpool in July 1937. Remaining part of the operational fleet on its home tramway until the end of the 2009 season the tram had been renumbered 623 in 1968 and has also received single destination indicators in lieu of its twin screens in 1974 and was fitted with a diamond pantograph in 1986. Following withdrawal 623 was acquired for preservation by the Manchester Transport Museum Society leaving in May 2010 although its first stop was at the short lived Museum of Museums rather than the Heaton Park Tramway. Having spent 18 months there it was transferred to Heaton Park and after work entered service in Manchester on 22nd January 2012. It has been a useful member of the fleet since that date and returned to Blackpool on loan in July 2017 to help celebrate the 80th anniversary of the class.

These images date from September 2003 and show 623 when it was carrying an all over advert for Mystique at the Pleasure Beach. This was the second design carried for this show and was applied in 2000 including no contravision. This first view shows the tram at Pleasure Beach whilst operating a special to Cabin on 7th September. 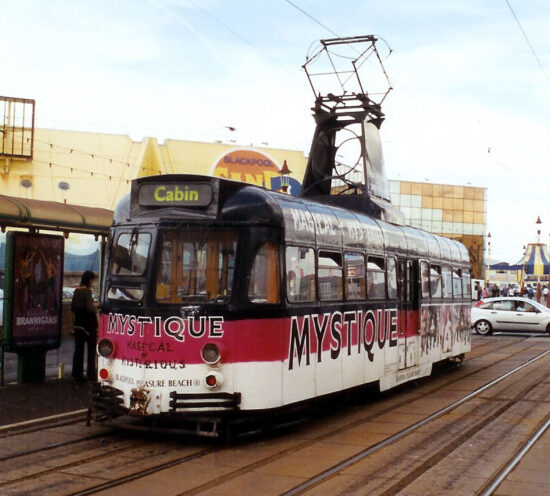 And on 13th September we catch up with 623 again, this time we are at Cabin and the tram is heading to Starr Gate. 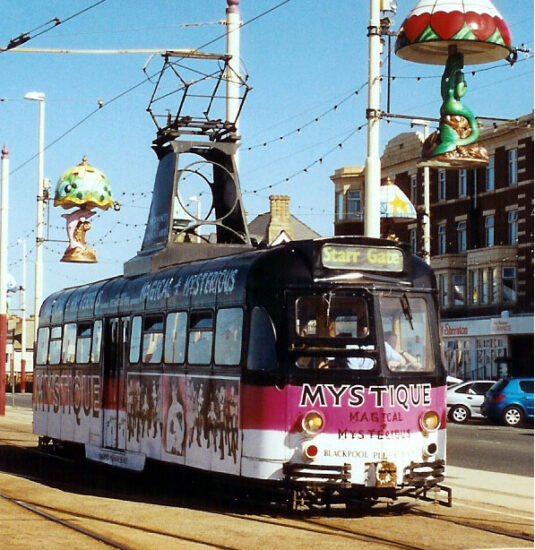