Trevor Roberts, the Managing Director of Blackpool Transport Services, has announced that it is planned to use the available modified Balloon cars, often referred to as the ‘B Fleet’, over the busy autumn half-term school holiday period towards the end of the 2012 illuminations. This is traditionally the busiest week of the year for the tramway and so it makes good sense to run more trams, especially as passenger numbers have exceeded all expectations so far this year.

At the time of writing, six of the double-deckers which have been modified with widened centre entrances and doors operated from the driver’s cab, are available for service: these being 700, 707, 709, 713, 718 and 724. All of them have seen some use already this year, but in most cases the number of outings they have actually made can be counted on one hand! Indeed, so far none of them have turned a wheel during the illuminations season, despite crush loadings on the Flexity2 trams at many times. It is also hoped that car 719, currently outstationed at Starr Gate where it is expected to be painted in the tramway’s new purple and white fleet livery, may be ready in time for half-term week. Unfortunately work on the conversion of sister car 711 is unlikely to be completed this year whilst 720 is unserviceable after its doors were damaged in an unfortunate shunting accident.

Despite this bold announcement, it is not completely clear when the modified Balloon cars will actually run. For many, the school half-term holidays coincide with the final week of the 2012 illuminations, the week ending with Sunday 4th November. However, some schools have their holidays a week earlier and so there is a possibility that the trams may be used for an extended period – something which would be a very welcome capacity boost at this busy time of year. Hopefully Mr Robert’s promises will be adhered to and the best of the 2012 season is still ahead for the Blackpool tramway! 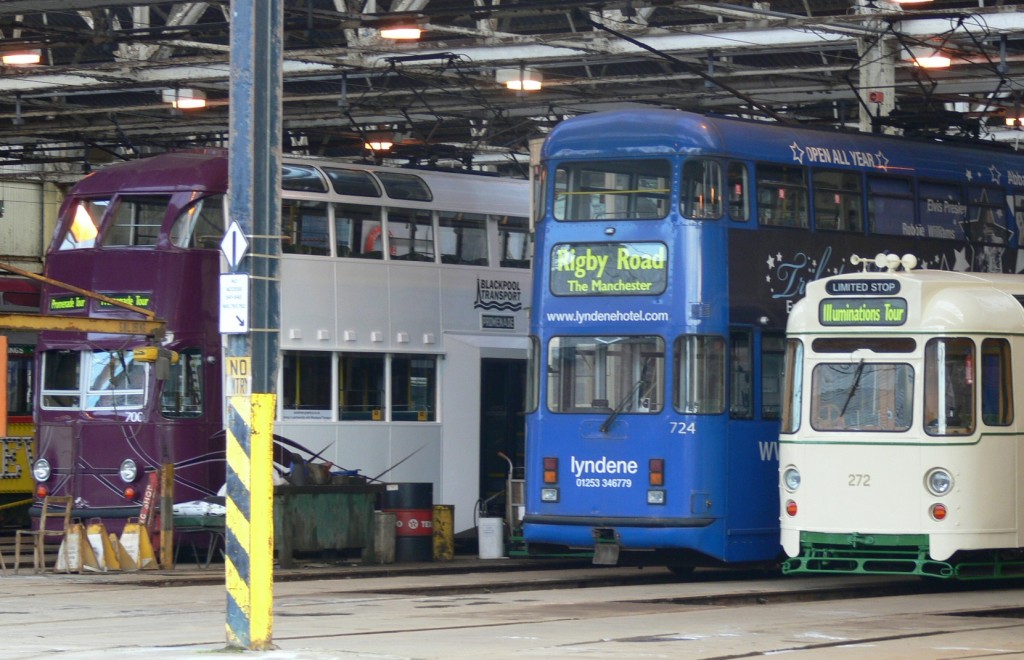 The widened Balloons have spent most of 2012 sitting in the depot at Rigby Road, and that is where cars 700 and 724 are seen in this typical depot view. Also visible is freshly painted Towing car 272, now respledent in cream livery. (Photo by Andrew Waddington)