Hardly a week seems to pass by of late when there is not some positive news to report on regarding some exciting development at Beamish, the Living Museum of the North, with regard to its extensive transport collection. Fresh from the superb repaints of two trams and the announcement of a major tram event for April 2013, the Museum is also refurbishing part of its depot complex for use as a dedicated workshop area.

The small lean-to shed, sited alongside the main tram & bus depot at Beamish close to the Foulbridge tram stop, is now receiving some attention to improve working conditions for staff and volunteers, as well as offering greater protection to the vehicles contained within. New lining and insulation panels have recently been installed within the building, which will shortly be redecorated. Once painting is complete, it is planned to improve the lighting and the power supply available inside, whilst the floor will be sealed and painted. This will create a greatly improved workshop where trams can be overhauled and repainted on site.

The first tram likely to benefit from the improved workspace will be Gateshead 10, which is due to receive some body work and a full repaint in 1920s Gateshead livery early next year, following a stint in service as Grimsby & Immingham 26. Future, larger projects could include the planned overhaul of Sheffield 264 as well as restoration work on the recently acquired horse tram Leamington & Warwick 8, and the long-stored Gateshead 51. Whatever the future holds, it is most encouraging to see this museum improving its own facilities so that more work can be done ‘in-house’ and hopefully this will be another major step forwards as Beamish strives to become one of the premiere destinations for tram enthusiasts worldwide. 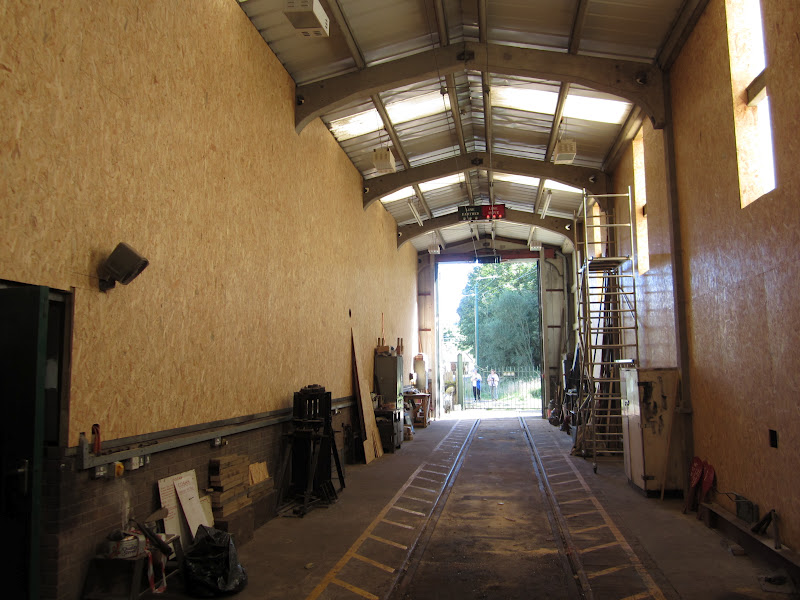 An interior view showing work undertaken so far on the lean-to tram shed at Beamish, a view which is not normally seen by visitors to the museum. (Photo courtesey of the Beamish Transport & Industry Blog)