Posted on Thursday 13 July 2017 by Gareth Prior

We are going back to Blackpool in this edition of Picture in Time and this time we feature a tram which remains in the town as part of the active heritage fleet.

Brush Railcoach 631 has been a part of the heritage fleet since it was inaugurated in 2012 and indeed for that first summer of daily operation it saw a lot of use with the weather not particularly conducive to the more popular open trams. 631’s history extends back to 1937 when it first carried passengers in the August as no. 294 and it has remained in service for the majority of the past 80 years – it is the only Brush Railcoach never to have left Blackpool Transport metals for its entire life. Its biggest change came in the 1990s when it was one of three of the class to undergo major overhauls which saw a number of modern enhancements added to the tram, many of which are retained today. It can today be found running in traditional Green and Cream colours with it being an ideal wet weather single decker for the increased heritage tram operation.

We feature two images of the tram here as 631 gets a wash through the equally historic portable tram wash on 2nd April 2009. At this time the tram was carrying an all over advert for Walls Ice Cream which had been applied back in 2007 and would remain on the tram until it received it current coat of green and cream in 2013. 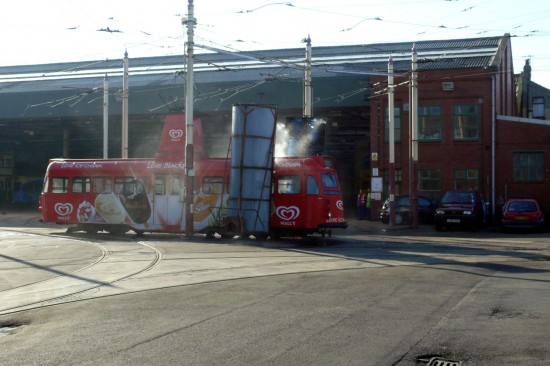 And then in this second photo as the tram emerges from the wash we can also see two Ex-Towing Railcoaches in the background namely 680 and 679. 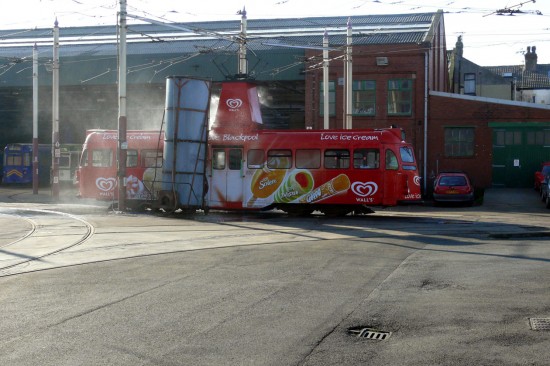 Both Photographs by Malcolm Storey