The Great Orme Tramway in Llandudno, North Wales is the feature of this edition of Picture in Time as we head back to 1989 for a view of one of the upper section trams.

The history of the four trams which run all services on the Great Orme Tramway today are all very similar and have mainly consisted of the vehicles running up and down their sections with very little variety except for a few different coats of paint. This photo shows no. 7 which is one of the two which covers the upper section between Halfway and the Summit. In this view the main thing to note is that the overhead wire is still in existence and one of the trolleys of 7 is attached to the wire. However this was not a wire to give power to the tram – the winching system has always been in use – but was rather used for communication although was removed in 1990. The tram carries the plain Blue and White livery. 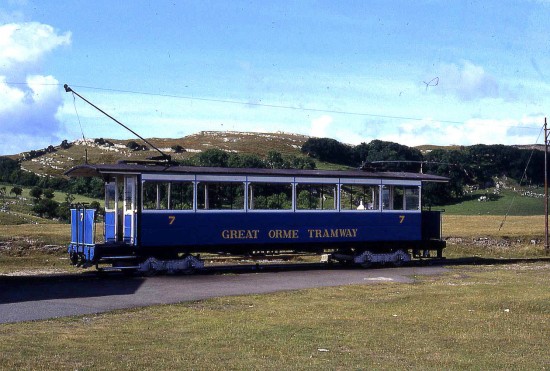