In Pictures: Blackpool Standard 48 in Oregon

Continuing our series looking at the Blackpool trams now residing in the United States we take a trip to Oregon for an update on Standard 48. As with fellow Standard car 144, the news is good on 48 which is currently being restored to working order by the Oregon Electric Railway Historical Society.

Standard 48 was built in 1928 and remained in service in Blackpool until withdrawal at the end of the 1962 season. Having remained stored in its home town for a couple of years it was exported to the United States in August 1964 firstly going to Glenwood where it was operated occasionally in the 1960s and then for a couple of years in the mid 1980s. Moving to Wilamette Shore Trolley in 1987 it then operated again for a period before being withdrawn.

Mark Kavanagh, OERHS Secretary, takes up the story: “We are currently working on restoring 48 to museum service. We had retired her from the Willamette Shore Trolley several years ago as that line was taking a toll on the old girl. What is more exciting is she will be operating via trolley pole for the first time since 1995. I actually was the one to last operate her under wire at the old museum. It was actually that last revenue day at the old museum. Unfortunately that was not a good day though. The day before they were operating our 40 ton steeple cab on the line. Between that and a cold morning, we think a piece of rail cracked. I did not see it, but the rail broke underneath 48 and she derailed. It took all day to get her back on the track. The following year we started moving cars out of the museum. 48 was move by truck to a railroad line nearby and operated under her own power (with a generator) about 20 miles to Lake Oswego, where she was transferred via crane to the Willamette Shore Trolley.”

Since being moved 48 has remained out of service mainly because the mainline at the museum was not very level and had lots of twists in it. However recently a railroad contractor – Rick Franklin Corp – offered to reballast and level the mainline which will make for a much smoother ride for all trolleys at the museum including 48. The overhead is also to be re-tightened so it is raised a few inches to provide proper clearance for 48 to operate once again.

It is hoped that after the catwalk on top of the car is reinstalled for the trolleybase that 48 may re-enter service within the next 6 weeks after many years out of service.

Thank you to Peter Watts for providing this information. Peter, as well as being a destination blind expert, is the Blackpool Heritage Trust’s US Liaison and is ensuring that there are good communications between the BHT and those organisations in the USA who are the current custodians of Blackpool trams. 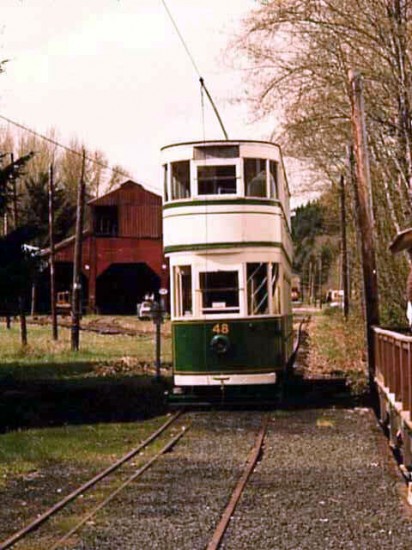 48 is in the final Standard car condition being fully enclosed and retains the green and cream livery style. This first view shows the tram, when still working with a trolley pole, back in 1992. 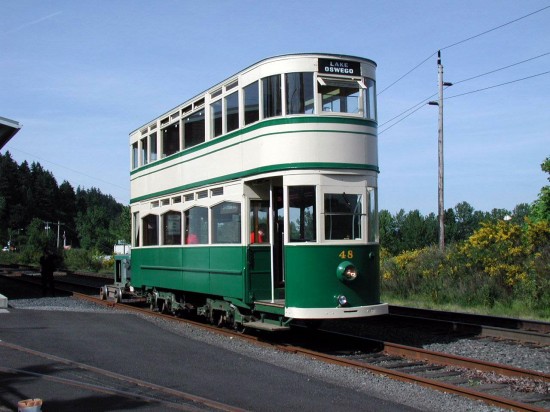 By 2001, 48 was running with a generator to provide power. It is seen here operated on Willamette Shore Trolley. 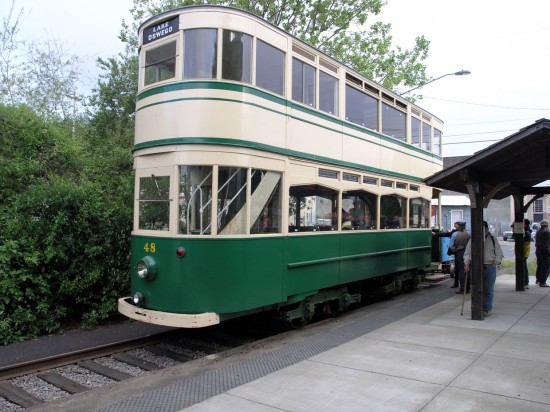 One final view of 48 shows the tram on its last day in service on Willamette Shore Trolley. The generator can just be seen behind the tram. (All Photographs courtesy of Oregon Electric Railway Historical Society)

1 Response to In Pictures: Blackpool Standard 48 in Oregon