Posted on Saturday 29 April 2017 by Gareth Prior

In this image we see two of the original Bombardier Incentro trams at the Station Street terminus on 11th June 2005. On the left is 204 – named Erica Beardsmore – and it is joined at the buffer stops by 214 – Dennis McCarthy. Both trams are carrying the original standard fleet livery of Dark Green, Black and Grey with 214 about to set off with a journey to Phoenix Park with 204 apparently out of service in the other platform. Today this location has changed with the buffers removed to allow for trams to run onto the Phase Two lines and the platforms have also been moved further along the line at Nottingham Station providing a more convenient interchange for passengers. 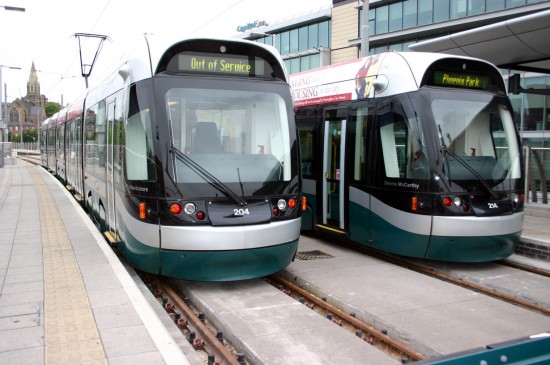