Blackpool’s Paint Shop is now occupied by a tram for the first time this year, having recently been kept busy with the application of vinyls and other finishing touches to Blackpool Transport’s new fleet of double-deck buses. The lucky tram to be under attention is B Fleet car 718, one of the four flat-fronted Balloons also known as ‘Millennium’ cars, albeit the only one which is currently active.

After being stored for a few years, 718 was surprisingly returned to service last year, primarily for use on illumination tours which necessitated the removal of its previous advertising vinyls for Madame Tussaud’s, leaving behind a ghostly white base coat. Despite this ugly appearance, the tram proved to be both useful and popular following its return to use, providing a welcome extra heated double-deck car for those cool autumn evenings. However, the ‘White Blob’ was always intended to be a temporary look and so it is pleasing to report that 718 is now being treated to a full repaint in a traditional green and cream livery. The style applied will be that worn by the Millennium cars when first introduced, and which has not been seen on any car since the 2004 season. 718 actually never carried this livery – indeed it has never operated in green and cream since being rebuilt into its current shape – and so this won’t be a strictly authentic repaint, but nonetheless the end result will doubtless be a vast improvement on its previous appearance and will go a long way towards making the tram a valued part of the fleet. Presumably, this repaint indicates that for now at least, 718 is being regarded as an honoury heritage tram as opposed to a member of the B Fleet, although its widened doors will remain in situ leaving the possibility that it could be used on specials to supplement the core service in times of need. Hopefully though, any such duties will utilise the trio of purple Balloon cars (700, 711 and 719) first, as using a green tram on service duties could well lead to confusion for passengers who are not closely familiar with the finer details of the Blackpool tramway.

Following completion of car 718‘s repaint, it has been confirmed that Standard 147 will be the next car to pass through the Paint Shop. Despite receiving some remedial attention whilst on loan to Beamish Museum recently, 147‘s external appearance is still well below that which its owners would ideally like, following several years of hard work at Blackpool and at Beamish, especially as it is considered to be one of the flagship vehicles in the heritage tram collection. Therefore it has been decided to give it a full repaint for the first time in over a decade. The tram will also receive some other conservation work to restore it to an immaculate appearance. Whilst it is a pity that the popular Standard car will be absent from the tramway for a while longer, its return to service should be well worth waiting for and this work should ensure that it looks very smart for many more years to come! 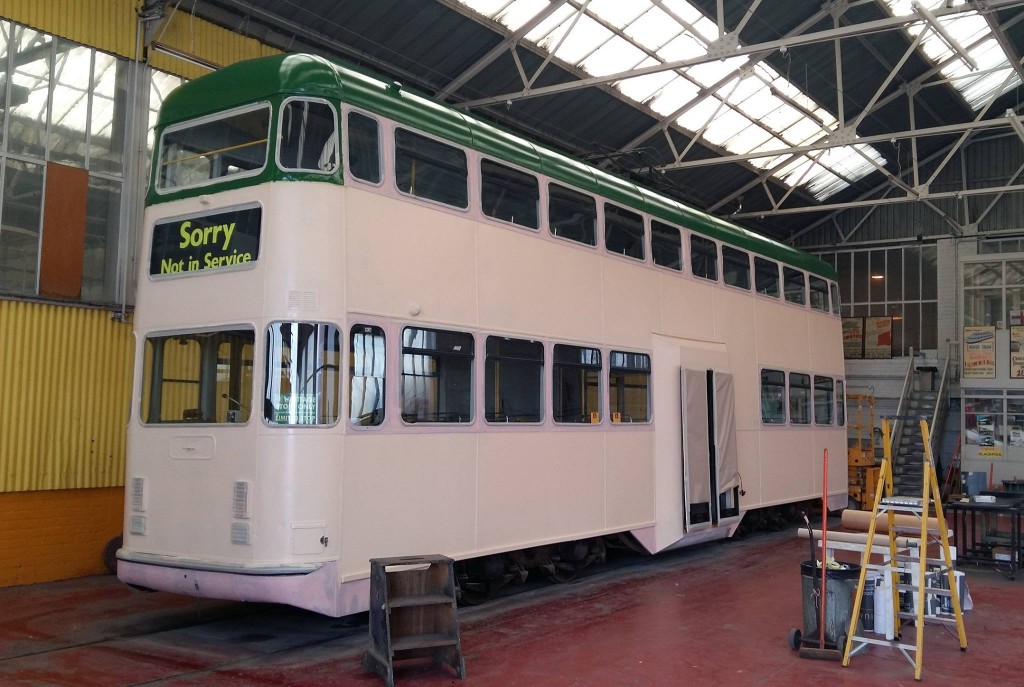 718 is seen in the Paint Shop in the early stages of receiving green and cream for the first time since it was transformed into a Millennium car. (Photo courtesy of Blackpool Heritage Tram Tours)