Posted on Thursday 13 April 2017 by Gareth Prior

In this edition of Picture in Time we are again featuring a tram from Blackpool with Second Series English Electric Railcoach 611 in the frame.

The tram, originally numbered 264, was the first of the Second Series of English Electric Railcoaches arriving in Blackpool in time to enter service in June 1935. It remained in service in the standard Railcoach design until the mid-1960s when it was admitted to the workshops for rebuilding, however unlike the Twin Car rebuilds the tram was destined to remain as a Railcoach albeit looking different. In fact it had a remarkable resemblance to a Twin Car with the ends now flattened using darvic plastic panelling as an experiement. This rebuild also had the advantage of upping the capacity to 56 seats (from 48). It remained in this style until September 1974 when it was withdrawn and was rebuilt again as OMO 12.

This photo was taken in August 1972 and shows the tram at Bispham Station with a service to Starr Gate. The tram was carrying roof advert boxes with adverts for Blackpool Zoo at this time. 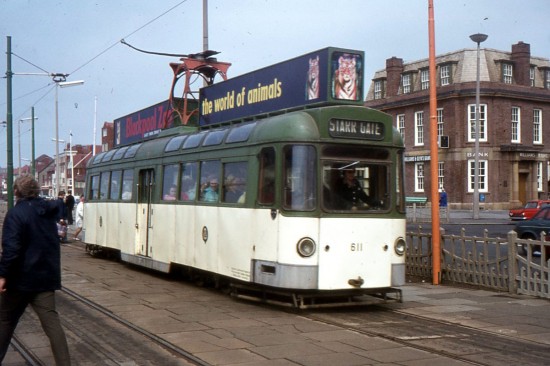