Posted on Tuesday 11 April 2017 by Gareth Prior

In this edition of Picture in Time we feature a tram which is the last tram to remain in the ownership of the Science Museum – Glasgow 585.

585 has been in the ownership of the Science Museum since the end of 1962 and for nearly 40 years was on public display in Kensington. Built in 1901, 585 was one of the Standard class of tram originally being an open topper before firstly receiving a short top cover and then in 1930 it became a fully enclosed tram (the condition it is in today). It was withdrawn from service in October 1961 and was restored to 1930s condition which included a repaint into the Blue route livery. Initially the plan was that it would be part of the scheme at the Middleton Railway in Leeds but plans changed and instead it joined the Science Museum collection. On display until the end of the 1990s a revamp at the museum meant it was moved to the Science Museum’s storage facility in Wiltshire where it remains to today.

This photo shows 585 at the Science Museum on 23rd July 1979 with an Underground vehicle also visible. 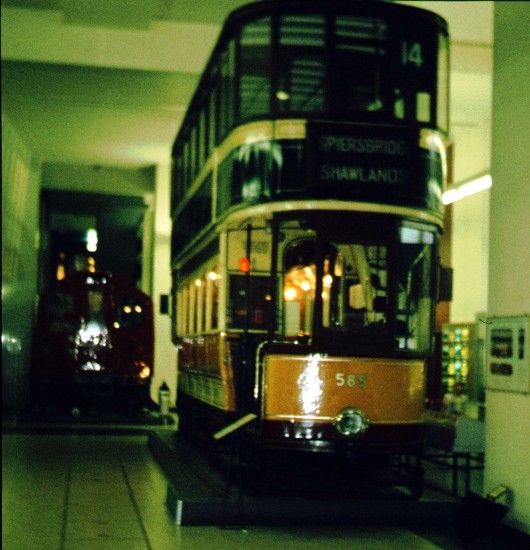 5 Responses to Picture in Time: Glasgow 585