Posted on Saturday 8 April 2017 by Gareth Prior

Off to Sheffield again for today’s Picture in Time image and we catch up with tram no. 123 during 2003.

In this view we see 123 – still with original roller blinds in situ – operating a Blue route service which is heading for Halfway having started off at Malin Bridge. 123 – which as with all of the tram still in operation in Sheffield was built by Siemens Duewag in Dusseldorf – is carrying the second Stagecoach Supertram livery of mainly white with orange, red and red stripes along with the dark blue band at the bottom. The tram was caught on camera in 2003. 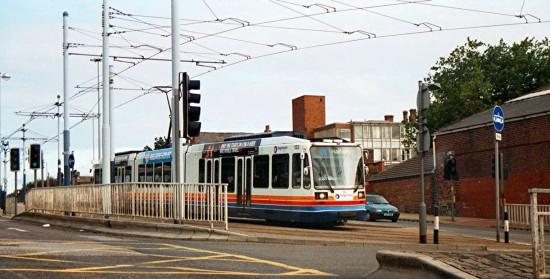