The only way is up for Beamish!

Beamish, the Living Museum of the North, is well known for being extremely proactive and thanks to a highly succesful couple of years, the rate of expansion looks set to increase further as the Museum has announced to the local press some of its plans for the next decade. Whilst the tram fleet are not explicitly mentioned, any such growth is sure to involve the trams, which have played a more prominent role in museum activities of late.

Following a period of strong yet stagnant visitor numbers, Beamish clocked up its highest ever attendance figures during 2011 when 497,000 people came to visit. Attendances have increased by around 200,000 in just three years and the business has taken on an additional 100 staff in the same time period; not bad considering that a few short years ago, redundancies were expected as revenue struggled to balance against the museum’s high operating costs. Plans are now afoot to invest £20 million in new developments over the next ten years, as revealed in a report published here: http://www.nebusiness.co.uk/business-news/latest-business-news/2012/08/22/past-pays-for-beamish-museum-as-it-plans-expansion-51140-31670110/

The main development being planned is the creation of a new 1950s themed area which will see a second, more modern town area constructed on a previously unused part of the massive 350 acre site. A number of pre-fabricated buildings have already been collected from Gateshead in readiness for this massive project. This could also give an excuse to further expand the collection of trams on site – until a few years ago the running fleet was generally fixed in the Edwardian era, but the recent addition of two Blackpool streamliners on loan from the Lancastrian Transport Trust, could well pave the way for other newer trams to join the fleet. Other plans include allowing visitors to stay at the Museum overnight to enjoy its many attractions over several consecutive days.

Beamish Museum Director Richard Evans admits; “They are ambitious plans but we’ve achieved so much in three years I see no reason why we can’t achieve them”. 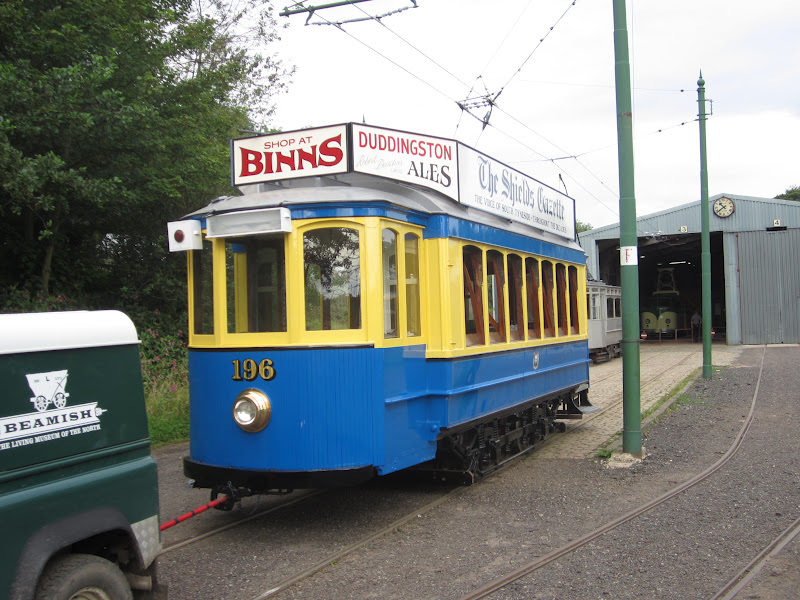 Just one example of the recent developments at Beamish is the superb overhaul and repaint of Oporto 196, seen here being towed outside for the first time in South Shields livery. This tram is expected back in service next week for the 'Power from the Past' event. (Photo courtesey of the Beamish Transport & Industry Blog)

1 Response to The only way is up for Beamish!