A spectacular end to the season at Crich

Another busy operating season at Crich Tramway Village has now come to an end. Although 2016 may not have had quite as much as excitement as some previous years with no ‘new’ trams joining the running fleet, it has still been a busy year with 20 different electric passenger trams running. The last public open day was Sunday 30th October, however on Saturday 5th November a special open day was held for invited guests which saw an enhanced tram service operating for the final time this year.

After a busy week with the popular annual ‘Starlight Spectacular’ event, the main operating season concluded with a standard three-tram service on October 30th. Trams in action on this day comprised Leeds 180, Oporto 273 and Leeds 399 with 399 doing the honours of the last service tram of 2016.

However, less than a week later the museum’s doors were flung open for a very special open day held for members of the Tramway Museum Society and various other organisations who have provided financial support to the museum and its trams over the years, as well as the local community. Despite a very cold wind the day was mostly sunny and dry which made for a very enjoyable occasion which was quite well attended. Trams in service were chosen to represent the various support groups who were invited to attend, with Chesterfield 7, Glasgow 22, Leeds 399, Blackpool 762, Liverpool 869 and London Transport 1622 in use throughout the day. Very surprisingly, Blackpool 166 came into service at lunchtime and performed a few round trips, proving popular in spite of the biting wind! Sheffield 510 was also used in the afternoon for a special trip for various guests and then operated in normal service afterwards.

Of note, this was only Glasgow 22‘s second day in service following its recent overhaul whilst for 1622, it was its last outing before it takes its turn in the workshop for attention to its trucks. 762‘s appearance was especially welcome as it came exactly five years to the day after it ran in Blackpool for the last time.

The interest on this special day was not confined to the main line; guests were able to look around the workshop whilst some of the trams in the Exhibition Hall were also opened up for inspection. There were several talks about the restoration of London County Council 1 and a chance to view some recent acquisitions for the library’s archives. Sheffield 74 was brought outside to highlight the need for funding to improve the depots due to the effects of condensation on this tram and others in the collection, and Newcastle 102 was displayed on the traverser to draw attention to the car which is now confirmed as the next to be supported by the Tramcar Sponsorship Organisation, who have agreed with the TMS to provide finance for a major overhaul enabling its future return to service. Getting 102 out of its usual resting place at the back of Depot V proved somewhat challenging and it was necessary for Cardiff 131 to drag it out of the shed, before the electric tug was summoned to pull it onto the traverser for display.

Other shunt moves took place, including a swap of Blackpool & Fleetwood 2 – which was unusually propelled by Berlin 3006 – and London United Tramways 159. This car has now taken 2‘s place in the Exhibition Hall for the winter months, to protect its luxurious interior from the damp environment in the main running sheds.

The final run of the day, and indeed the season, was in the hands of Liverpool 869 and to recognise the 60th anniversary of the closure of the ’19’ and ’44’ routes, these were displayed on the tram’s indicator blinds. So in all, a very nice and slightly different way to round off the season and an exercise that will hopefully be repeated in the future as it was well supported and much enjoyed by those present. 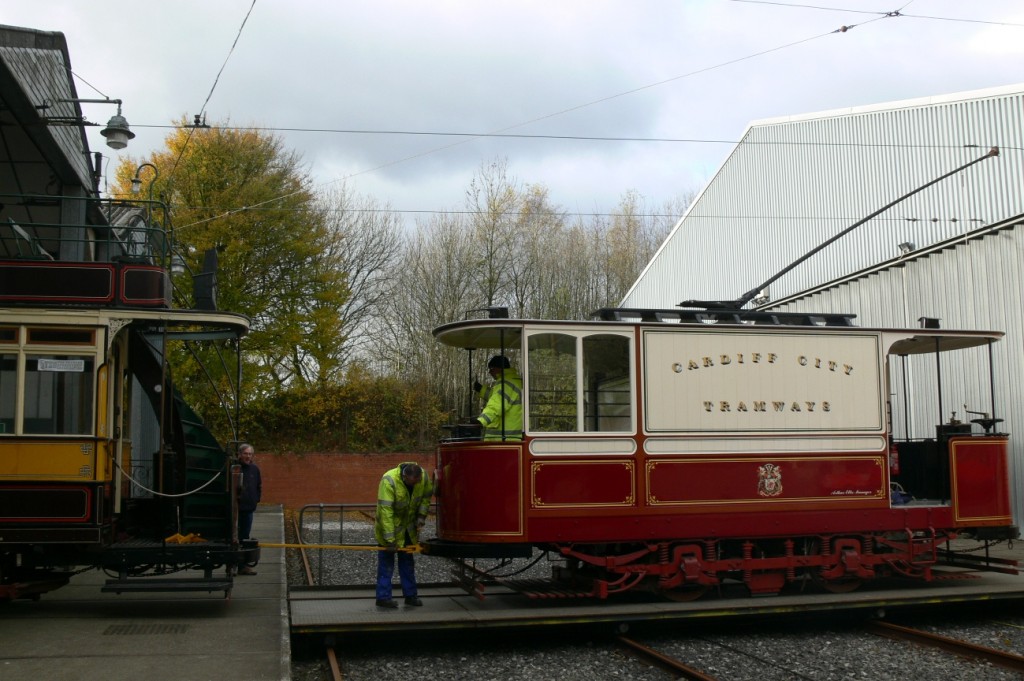 Cardiff 131 is seen on the traverser on 5th November having been used to coax Newcastle 102 - also in shot - out of the depot. 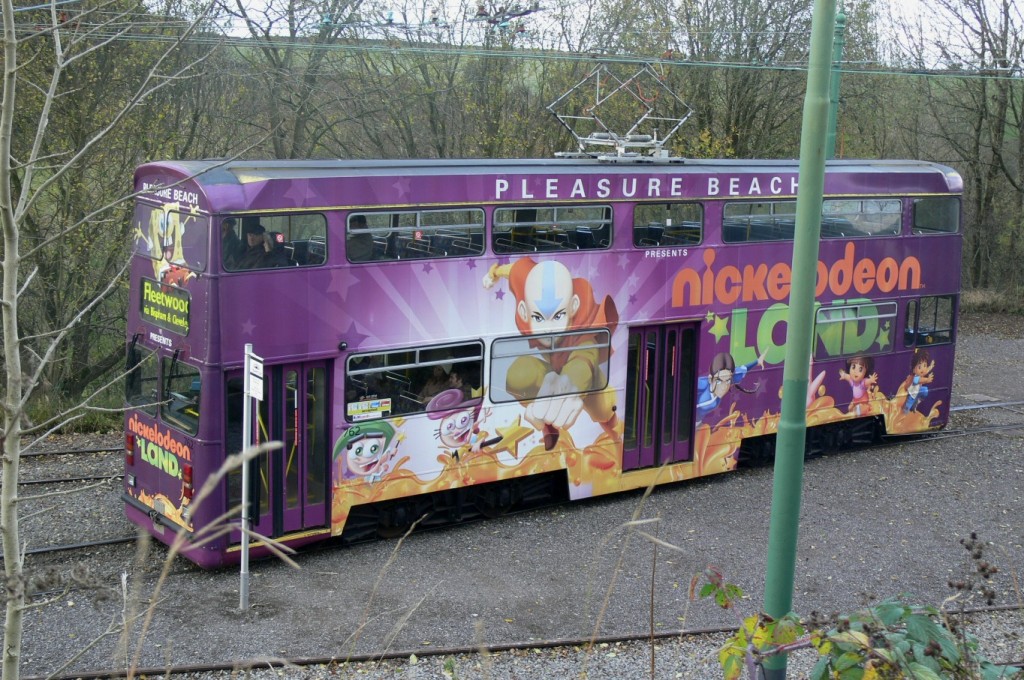 Exactly five years after it last ran in Blackpool, Jubilee car 762 is seen at Glory Mine terminus during the special members' open day. 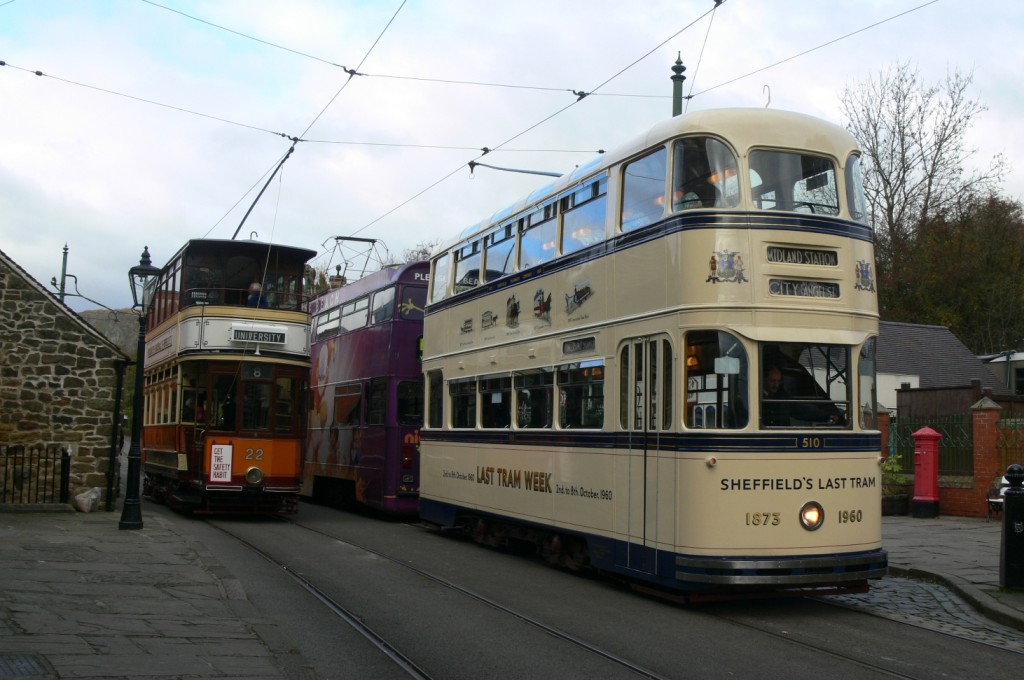 A busy scene from later the same day with Glasgow 22, Sheffield 510 and Blackpool 762 all at Stephenson Place. 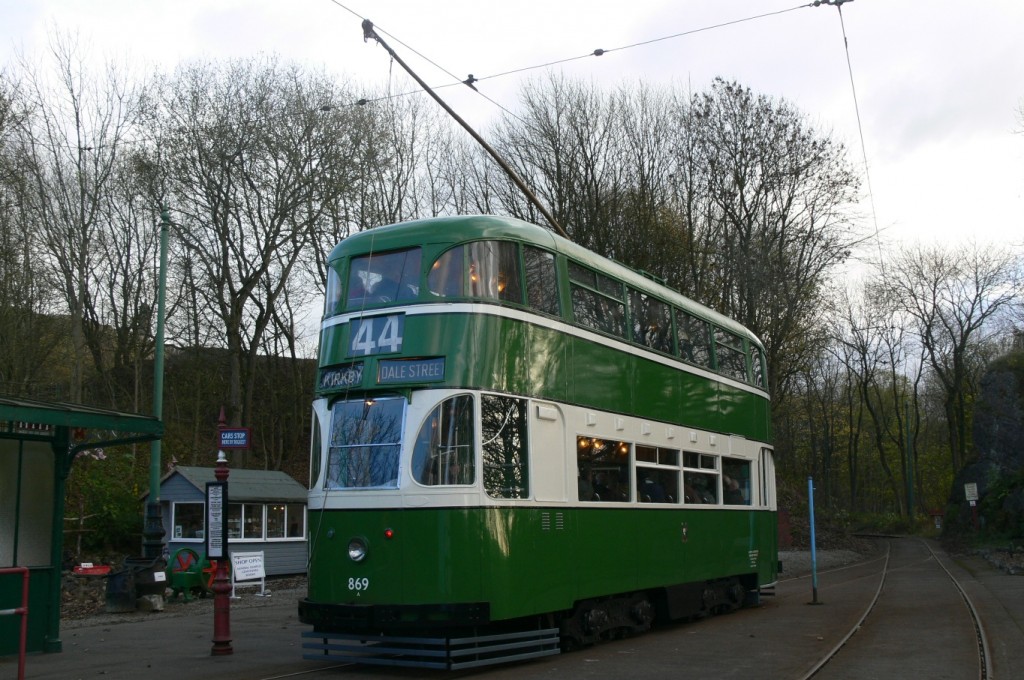 Commemorating the closure of Route 44 (the other end showed '19'), Liverpool 869 takes a brief pause at Wakebridge. (Photos by Andrew Waddington)