Posted on Tuesday 1 November 2016 by Gareth Prior

We head to Sheffield for today’s Picture in Time image as we feature one of the South Yorkshire Supertram’s Duewag built trams in action – 114.

114 is one of the 25 strong fleet of trams built by Duewag in Dusseldorf, Germany in 1993-94 arriving in South Yorkshire in time for the opening of the first of the network’s lines in 1994. Originally numbered 14 like all members of the fleet it received the extra 1 following the award of the contract to operate the network to Stagecoach.

In this view we can see 114 carrying the revised original Stagecoach livery (including the dark blue stripe below the doors) as the tram approaches Park Square Junction coming off the line to Sheffield Station. The tram is working on the Blue route to Malin Bridge when it was caught in camera in 2003. Today this view has changed with the refurbishment of the flats behind the tram. 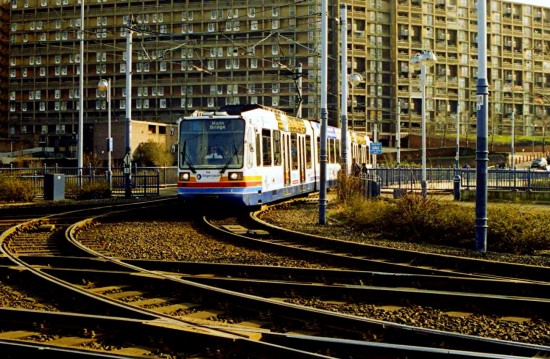