Posted on Sunday 23 October 2016 by Gareth Prior

It’s 1993 and we are in Llandudno for the next instalment of our archive photo series. Of course the tramway in question is the Great Orme Tramway as we take a look at one of the lower section’s tram – no. 5.

As with all four of the trams on the Great Orme Tramway no. 5 was built in time for the opening of the line by Hurst, Nelson & Co Ltd of Motherwell. It arrived in North Wales along with fellow lower section car no. 4 in 1902 and entered service in that same year. To be honest the history of all four of the trams is much the same and rather boring as there is no evidence to suggest that any of them have ever operated on the other section and so throughout its career has gone up and down the lower section in a variety of different liveries.

This view of no. 5 shows it descending on the lower section with Llandudno Bay seen in the background. The photo was taken on 17th April 1993 but apart from the age of the cars the scene has changed very little today. 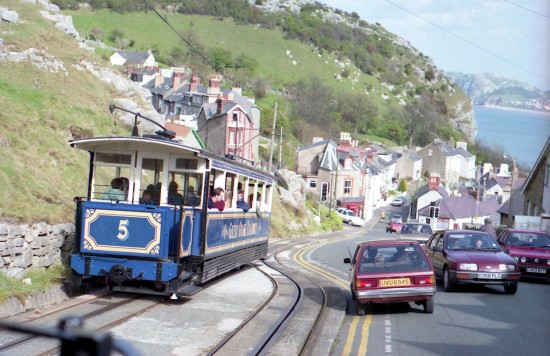