Posted on Monday 17 October 2016 by Gareth Prior

Manchester Metrolink M5000 3091 has gone gold in celebration of Team GB’s golden summer at the 2016 Rio Olympic and Paralympic Games. The tram has received a special vinyl wrap livery – mainly avoiding the windows – as part of a day of celebration in Manchester which has culminated in a Heroes Parade through the city. 3091 has been chosen specifically for the livery as that is the total number of gold medals won by both Team GB and Paralympics GB during the summer.

Peter Cushing, TfGM Metrolink Director, said: “We’re absolutely delighted that Manchester has been chosen to lead the celebrations, particularly given the extensive talent that comes from and trains in the region. Our fantastic athletes once again provided countless memories over the summer and are an inspiration to millions of people, so I’m absolutely delighted that we’ve been able to honour and celebrate their success with this special golden tram. Tram 91 looks absolutely stunning in its golden livery and I hope the people of Greater Manchester enjoy it. We’d love to see as many pictures as possible from our passengers and the wider public and I’d encourage everyone to get involved using #TramGB to share their photographs.”

A timelapse video of the application of the vinyls is available at https://www.youtube.com/watch?v=Az_lnG9SXPI. 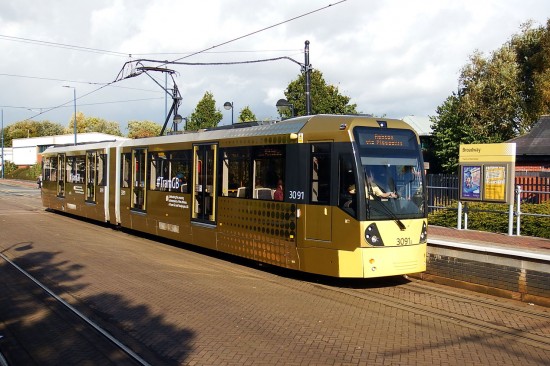 3091 at Broadway. The ends have remained in the standard Metrolink yellow with the body and spots going gold. 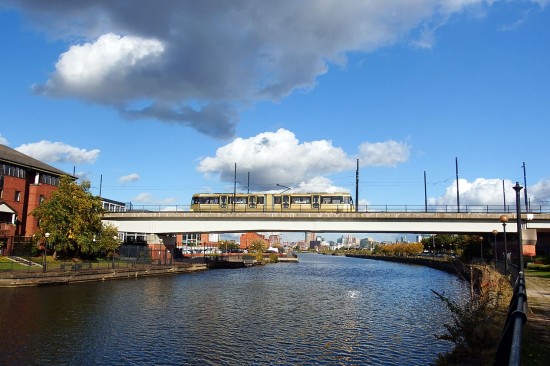 3091 heads to Eccles on its first day in use carrying the gold. 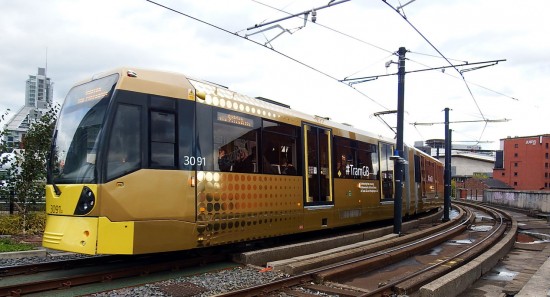 Deansgate-Castlefield is the location for this shot of 3091. (All Photographs by Steve Kemp)