In Pictures: New advert for NET 206

Posted on Tuesday 20 September 2016 by Gareth Prior

Nottingham Express Transit Incentro 206 has recently received new advertising vinyls for Jet2.com, replacing the previous long standing advert for e-on. The tram has retained its red base but has been covered in vinyls for Jet2.com – and we mean covered – with extensive use of contravision on the windows. This is the second advert livery that 206 has carried in Nottingham. 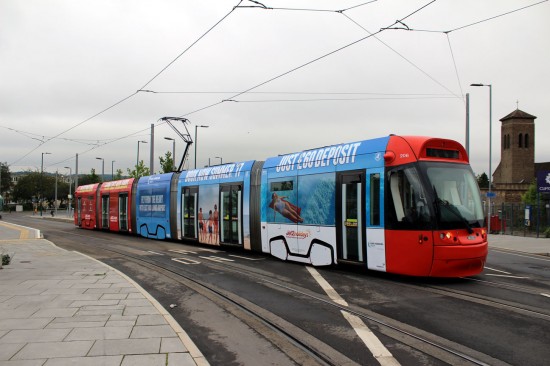 206 shows off its new livery as it leaves Holy Trinity bound for Clifton South on 19th September. (Photograph by Gareth Prior)

* A full gallery of images from NET on 19th September will follow on British Trams Online soon.

1 Response to In Pictures: New advert for NET 206