Posted on Thursday 16 August 2012 by Gareth Prior

As mentioned a couple of days ago in one of our news stories two three car sets of  Docklands Light Railway units have received all over adverts for the Olympic Games. One
of these sets (they have tended to operate semi-permanently since receiving the vinyls) includes B92 units 63 and 74 and B2K unit 94 and advertises General Electric products including body scanners.

The mainly black livery features light blue along the sides and on the doors. At first glance it is difficult to tell who or what is advertising on the trains but on boarding the GE logo is on the doors advertising particular products including the body scanners. A report on the internet suggests the advertising liveries will remain in situ for 16 weeks since original application (which was in mid July).

This advertising livery is not the only one to be currently carried on the Docklands Light
Railway with 54, 82 and one other unit in use in an advert for Lyca Mobile. This livery uses a white base colour with red doors.

One further point about the service offered on the Docklands Light Railway during the
Olympics is that for most journeys it appears that the trains were being driven by members of staff rather than operated automatically as per the norm. 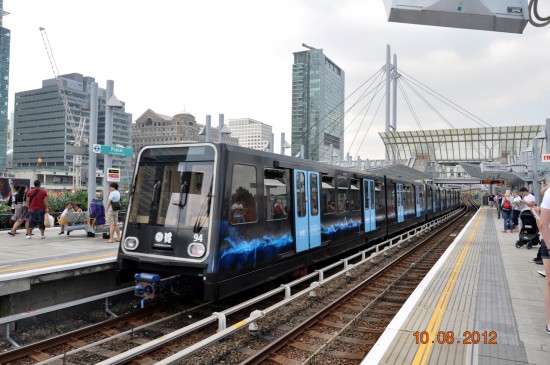 The three car DLR unit advertising General Electric is seen here at Poplar on 10th August with 94 at the back. (Photo:Ken Jones)