The Rocket has landed!

A milestone in the history of the most unusual tram to ever run in Blackpool occured in the early hours of Tuesday 14th August, when the illuminated Rocket 732 returned to the promenade after a decade-long absence. As has been widely reported, the tram has been treated to a cosmetic restoration at Blackpool’s illuminations depot, for static display to help celebrate the centenary of the annual illuminations. This has included applying some fresh paintwork, replacing the light bulbs and fitting new ‘Tramnik One’ vinyls to the front end.

It was on July 9th that the Rocket had left Rigby Road, and just over one month of intensive work has transformed the dusty-looking tram into a star once again. During the early evening on Monday 13th August, the Rocket was prepared to leave aboard the now familiar low-loader provided by Scott’s Heavy Haulage. After a few delays – not least caused by torrential rain and a thunderstorm – the tram set off and made the journey to Gynn Square via Dickson Road; a part of Blackpool that has not been graced by the presence of a tramcar since the 1960s. To add to the historic occasion, the Rocket was constructed on the underframe of an old Pantograph car which would have once been a regular sight on this road. On arrival at Gynn Square, 732 was carefully unloaded onto a special length of track laid on the roundabout which has played host to many striking illuminated displays over the years, but never before a full-sized tram!

The unloading process took place in the hours of darkness so as to minimise disruption to road traffic, as a partial road closure was required to get the low loader into a suitable position. In spite of this, a few enthusiasts were present to witness the occasion and capture the Rocket’s return on camera for posterity. Unfortunately, the Rocket was effectively the wrong way around inside the illuminations depot which meant that, when it was unloaded, the nose cone was pointing away from the promenade. Although admittedly the display would have been even more spectacular had it been facing towards the tramway, 732 nonetheless made a fine sight in its prominent new location.

Since its arrival, the short length of track that 732 sits on has been extended slightly which may well allow the tram to be moved slightly into the centre of the roundabout. Further work to complete will include the fitting of hinged lower body panels which will be designed so they can easily be removed for future road journeys. The long-term plans for this iconic tram are not yet known, but one possibility is that it could end up as a regular static feature of the autumn lights and so this feature will enable it to be transported without the need to dismantle the lower panelling section. For now, the Blackpool Illuminations Department and the Lancastrian Transport Trust (who of course retain ownership of the car) should be extremely proud of bringing this much-loved tram back into the limelight, and it looks set to be the biggest talking point of the 2012 illuminations. However, further tram interest will of course be provided by Brush car 290 which is expected to move to another siding opposite the Pleasure Beach imminently, where it too will go on static display in time for the illuminations season, which begins on Friday 31st August. 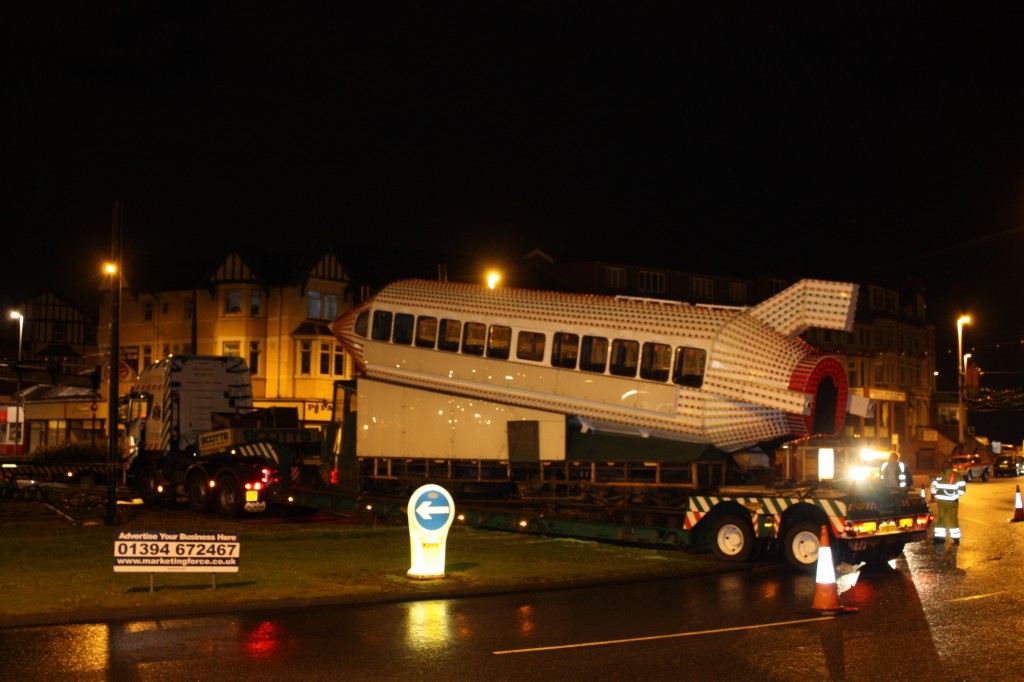 At approximately midnight on 13th August, the Rocket tram 732 is seen arriving at the Gynn roundabout, ready to begin the latest chapter of its life. (Photo by Andrew Blood)