The latest addition to the Blackpool Heritage Tram Tours operational fleet was unveiled at a special event on Friday 29th April. Although Balloon 723 had returned to use last year, it was only used occasionally due to its shabby external appearance; however, following a complete repaint it is now ready to take on a full-time role as a heritage tram and is expected to see regular use this season for the first time since 2011.

723 was initially prepared for use for last September’s special 130th anniversary weekend when its advertising vinyls were removed, uncovering the 1980s green and cream livery beneath and leading to it being dubbed ‘the scruffy surprise’! Following a few further outing in this condition, most recently in February, the tram has now passed through the Paint Shop to be repainted in the same livery, but with a few minor improvements. The opportunity has been taken to correct a previous error in the positioning of the thin green stripe above the driver’s cab doors, whilst the small lights above the destination boxes have been removed and Blackpool Corporation crests applied in their place. Other changes include the grab rails on the centre door area which have been repainted grey, whilst the lifeguards are now green.

Bearing in mind that 723 was extensively rebuilt in 1993 and remains in this condition, the application of such an accurate version of the 1980s livery is not really appropriate for the tram – but it is hard to mind when it looks so good! This version of the fleet livery is widely considered to be one of the most attractive ever worn by the Balloon class, so its reappearance is a welcome one and 723 will no doubt be much admired and photographed this year.

To celebrate 723‘s return to service, a special evening launch tour was arranged on 29th April which saw the tram load passengers on Hopton Road before setting off at 1615, bound for Fleetwood. The car then worked a full-length run to Starr Gate, where it was briefly posed next to the other 723 – an etching of the tram on the fencing alongside the new depot complex! It was then on to Thornton Gate, Pleasure Beach and back to Fleetwood in darkness before returning south, where another surprise was in store. Due to a problem with its transponders which failed to grant access to the junction at Manchester Square, the car was forced to continue south to Starr Gate, making this a very rare visit to the southern end of the tramway for a heritage car in darkness. The tram was then stabled inside the modern depot, bringing an end to an eventful inaugural tour. 723 is now scheduled to operate on both Sunday 1st and Monday 2nd May as part of the weekend’s enhanced heritage output, and should then be a regular performer on tours throughout the summer and illuminations. 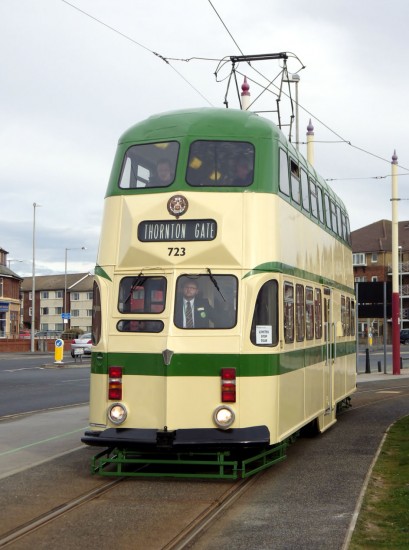 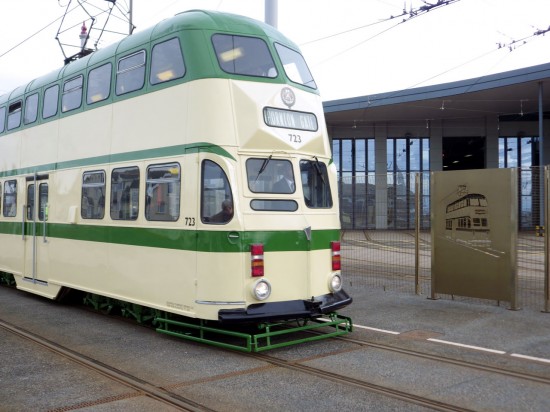 The two 723's together at Starr Gate! 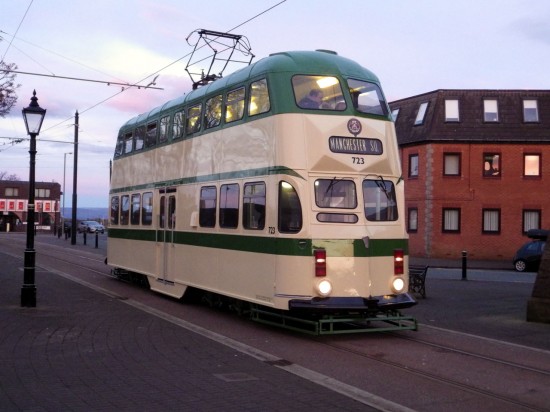 723 at Fleetwood awaiting to head back to Manchester Square. (All Photographs by Paul Derrick)